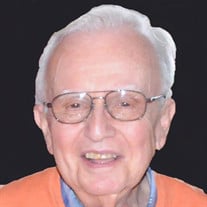 UTICA – William (Bill) Pappas, 90, passed away on February 13, 2022, at Masonic Care Community. He was born on May 14, 1931, in New York City, the son of the late John Pappas and Lillian (Smith) Pappas. Bill was a graduate of New York City schools and attended New York University. He was an engineer at WKTV and in his early years, would fill in on-air. On July 24, 1955, Bill married Angela M. Lasagna in New York City. With a face for TV and a voice for radio, they moved upstate for Bill’s career. They made many friendships throughout their years in Deerfield, and in their later years, added a canine companion, Flash, who was a neighborhood phenomenon. Bill and Angela could always be found together, whether it was at a Shaklee meeting or a hockey game or anything pertaining to their grandchildren. They shared 63 years together before Angela’s passing on December 21, 2018. Bill enjoyed various hobbies, including chess matches, fish breeding, Ham radio operating, and many other pastimes. Being a TV engineer, he was on the cutting edge of technology, always having the latest computer and using his iPad throughout the pandemic to FaceTime his family nightly. Anytime Bill entered a room, you could expect to hear a joke or an impression, whether you had heard it before or not. Bill could always be found with a smile on his face, no matter the situation. Bill was an ever-present father and grandfather; always there if you needed words of wisdom or a laugh. Bill is survived by his daughter and son-in-law, Dianne and Michael Nassar; grandchildren, Michael Nassar and Alexis Nassar, sister-in-law, Sondra Lasagna, nephew, Brian Lasagna, and niece, Beth Turk. He also leaves many wonderful friends that he made while he was a resident on the Windham Household at Masonic Care Community, especially all the other Bills. Bill was predeceased by his brother-in-law, John Lasagna. Relatives and friends are invited to call on Monday, February 21, from 4-6 pm at McGrath, Myslinski, Karboski & Nunn Funeral Directors, 470 French Rd., Utica. Funeral services will be on Tuesday, February 22, at 11 am at Grace Church, 6 Elizabeth St, Utica. In lieu of flowers, remembrances in Bill’s name may be made to Anita’s Stevens-Swan Humane Society (www.anitas-sshs.org). Envelopes will be available at the funeral home. Bill’s family extends their gratitude to the workers at the Masonic Care Community, especially the Windham Household staff, as well as the Optum Health Care staff for the care provided to Bill. Visit tribute video at: https://www.tributeslides.com/tributes/show/K5QG4R3FHC3WW6S4

The family of William George Pappas created this Life Tributes page to make it easy to share your memories.

Send flowers to the Pappas family.