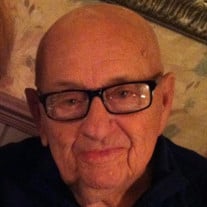 UTICA- William (Bill) Maycock, 88, passed away on Tuesday, February 22, 2022, at the Masonic Care Community. Bill was born on August 6, 1933, in Nanticoke, PA, the son of James and Frances (Cordick) Maycock. He lived in Warrior Run, PA until the family moved to Sidney, NY. Bill attended Sidney schools, graduating in 1951 as the only person from his class to hold letters in 4 varsity sports; football, basketball, baseball, and track. He then worked at the Scintilla Division of the Bendix Corporation until he entered the United States Air Force, which included tours of duty in Korea and Japan. In 1958, Bill moved to Utica to attend Mohawk Valley Technical Institute (now MVCC), where he earned an Associate's Degree in Banking, Insurance, and Real Estate. This led to a successful 40+ year career in the Claims department of the Utica Mutual Insurance Company. It was in his early years at Utica Mutual, that Bill met Ann Duffin. Whether it was her beauty and charm, or the fact she was willing to attend a NY Mets game on her honeymoon, he knew she was a keeper. Bill and Ann were wed on April 11, 1964, at St. Francis de Sales Church, Utica. They attended the inaugural game at Shea Stadium on April 17, 1964, where the Mets lost 4-3 to the Pittsburgh Pirates. This only served to strengthen the bedrock of the couple’s 56-year marriage, as together they endured more than a half-century of being frequently disappointed by the Mets. Bill and Ann loved to take road trips. From a local day trip, to weeks spent exploring various regions of the country, they shared many wonderful adventures and memories. Ann and Bill were by each other’s sides right up until Ann’s passing at the Masonic Home on September 8, 2020. Every day thereafter, he missed her with all his heart. Otherwise, Bill enjoyed his simple pleasures and routines; watching the Mets, the Giants, and Syracuse Basketball, John Wayne, Schaefer Beer, western and war movies, military history, reading the daily newspaper, peanut butter sandwiches, and attending any/all the sporting events of his children/grandchildren. Bill was well-liked by everyone who knew him. He was a friendly, funny, good-natured, kind, and thoughtful man. As someone who held a great deal of knowledge and life experience, Bill could always be counted on to give well-informed, level-headed advice; and he was frequently counted on. His emotions ran deeply when it came to the people close to him. If someone he loved had a problem, he felt it. He did whatever he could do to help; whether it be in finding a solution, offering a humorous perspective, or just being there to take on some of their pain. Bill treasured his family; providing them with love, security, and happiness was the motivating factor behind everything he did. Surviving, are Bill’s daughters, Tracy Maycock, Utica, and Katie Maycock, Yorkville; son and daughter-in-law, Bob and Melinda Maycock, Deerfield; grandchildren, Danny (Erica Hollister), Utica; Joe, Andrew, and Kayla Maycock, Deerfield; great-granddaughters, Aria and Paige Maycock, Utica; honorary daughter, Lesley Hayes; brother-in-law David Duffin and wife, Carol (of whom Bill noted, “were really more like a brother and sister” to him), Hilton Head, SC. Lastly, the family would like to extend their heartfelt thanks and appreciation to everyone at the Masonic Care Community for the care, kindness, and assistance we have received from people throughout the building these last several years: CNAs, RAs, nursing, medical, Community Life, maintenance, office staff, Social Workers, dietary, reception, rehab and Bill’s fellow “Windham Warriors,” living in the Windham Household. Relatives and friends are invited and may call Monday from 4-6 p.m. at McGrath, Myslinski, Karboski & Nunn Funeral Directors, 470 French Rd., Utica. Funeral services will commence following visitation at 6 p.m. Interment will be in Forest Hill Cemetery. In lieu of flowers, please consider a donation in Bill's name to a local charity.

UTICA- William (Bill) Maycock, 88, passed away on Tuesday, February 22, 2022, at the Masonic Care Community. Bill was born on August 6, 1933, in Nanticoke, PA, the son of James and Frances (Cordick) Maycock. He lived in Warrior Run, PA until... View Obituary & Service Information

The family of William "Bill" Maycock created this Life Tributes page to make it easy to share your memories.

Send flowers to the Maycock family.