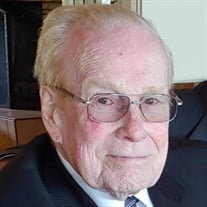 UTICA – William R. Keeler, 98, passed away on Friday, July 30, 2021. Born on December 9, 1922, in Greenport, NY, Bill was the son of the late Frank and Rose (Brennan) Keeler and was a graduate of Hudson High School. He served in the U. S. Air Force during WWII. On October 13, 1951, he married the love of his life Anne Dietsche in the Church of Our Lady of Lourdes in Utica, NY. They shared 58 years of love and devotion prior to her passing on November 7, 2009. Bill’s professional career started with GE in Pittsfield, MA as a machinist. From there he went onto college and earned his Mechanical Engineering Degree at Syracuse University. He relocated to Utica and was employed by Chicago Pneumatic before returning to GE for the majority of his career. Bill retired in 1988 from Nolan Jampole Products in Rome, NY. During his years as an engineer at GE, he worked on rocket guidance systems, microelectronic manufacturing processes and helped put men on the moon for which he earned an award from NASA for his work. While Bill and Anne were busy raising their eight children he managed to be involved in several activities. Bill enjoyed golf, swimming at Slayton Bush Swim Club and skiing throughout Central NY which he shared with all of his children. He loved woodworking and created several furniture pieces treasured by his family. Bill coached and served as commissioner for South Utica Little League for several years. During his tenure, he designed and constructed the dugouts for the field. His design was used by most Little Leagues in the area. Every winter Bill would turn the backyard of the family home on Proctor Blvd. into an ice skating rink. The rink was a favorite gathering place for all the neighborhood kids. Weekends would see any number of children of all levels of skating enjoying themselves. Bill and Anne were members of the Debonair’s Club and they enjoyed their monthly outings of dinner and dancing with friends. Bill was also an avid bridge player, participating in clubs and playing with friends. He was a member of Our Lady of Lourdes Church, served as a Eucharistic minister, was active on a variety of committees for many years. He also built and installed the hymnal racks still in use at the church today. Bill is survived by his children, Brian Keeler (Berta), Thomas Keeler (Susan), John J. Keeler, Stephen Keeler (Tracy), Mary Anne Huber (Matthew), Judith LaTour (Richard); son-in-law, Gary Spatuzzi; also surviving are his grandchildren, Sean, Scott, Brittanny, Shauna, Brennan, Gillian, Kiley, Connor, Nichola, Emily, John, Patrick, Richard, Noelle and Stephanie, and many nieces and nephews. He was predeceased by his daughters, an infant daughter born in 1952, Maureen Keeler-Spatuzzi, and son, William M. Keeler. Funeral services will be on Friday, August 6, 2021, at 11 am from the Church of Our Lady of Lourdes, where a Mass of Christian Burial will be celebrated. The family will receive guests following the Mass. Bill will be laid to rest in St. Agnes Cemetery with his beloved wife, Anne and his children. In lieu of flowers, remembrances in Bill’s name may be made to Our Lady of Lourdes Church and Hospice & Palliative Care, New Hartford, NY. Bill’s family would like to thank his sons, John and Brian Keeler and daughter-in-law, Berta Keeler, for the wonderful care they gave him over the past several years allowing him to remain at home and with family. They would also like to thank Dr. D. Christopher Clark for the years of care and the care and support Hospice staff gave Bill in these last few weeks.

The family of William R. Keeler created this Life Tributes page to make it easy to share your memories.

Send flowers to the Keeler family.