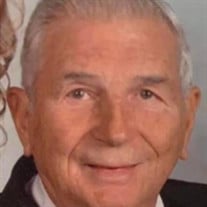 William “Bill” A. Klein, 92, passed away on Friday, April 22, 2022, at home with his family by his side. Born on June 12, 1929, in Utica, Bill was blessed to be one of eleven children of Spencer and Laura (Gross) Klein. He attended Utica schools and began his service in the US Army in 1951, transferring to the Army Reserves in 1953 until 1957. On September 8, 1984, Bill married Lynda Foley at Blessed Sacrament Church, a union of 37 years. For most of his career, he was employed in electrical sales with M & L Electrical Sales. Bill was a devoted husband, father, grandfather, and great-grandfather. A true gentleman, who never spoke a bad word of anyone. He was the heart of his family. He loved every one of them unconditionally and was proud to have a special relationship with each. Bill was proud to live in Utica where he was a member of the Utica Maennerchor, the American Legion Post 1376, and was a communicant of the Church of Our Lady of Lourdes. Bill was an avid baseball fan and loved his NY Yankees. Surviving besides his loving wife, Lynda are three children, Mary Elizabeth (Michael) Lynch, Michael (Michele Nole) Doggett and Kelli (Jason) Brown; sisters, Lois Koscielniak and Janice Jennings; grandchildren, Michael (Lindsey) Lynch, Melissa Lynch, Manda Lynch, Gavin Lynch, Patrick Emery, Alexandra Doggett, Bailey Brown (Parker Ross), Ryan Brown (Amelia Scott), Jillian Brown; two great-grandchildren, Khole and McKenzie Lynch; brothers-in-law, William (Dorthea) Foley, James “Doc” (Judy) Foley, Timothy (Patty) Foley and many nieces and nephews. Bill was predeceased by many brothers and sisters including his sister and brother-in-law, Beatrice and Glenn Morgan with whom he shared a special friendship. Relatives and friends are invited to attend a Mass of Christian Burial to be celebrated on Tuesday at 11:30 a.m. at Mary, Mother of Our Savior Parish, Lourdes Campus, 2212 Genesee St., Utica with Rev. Joseph Salerno officiating and Bill’s brother-in-law, Deacon Timothy Foley delivering the homily. The family will receive guests following the Mass. Interment will be in St. Agnes Cemetery, Utica. Bill’s family extends their deep appreciation to Hospice for the care and compassion shown Bill during his illness. In gratitude, they ask remembrances in Bill’s name be made to Hospice & Palliative Care, Inc. (www.hospicecareinc.org).

The family of William "Bill" A. Klein created this Life Tributes page to make it easy to share your memories.

Send flowers to the Klein family.