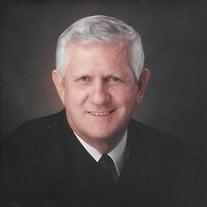 NEW HARTFORD – The Honorable Walter V. Loin, 88, passed away on December 27, 2020, after a brief illness. Walt was born on October 22, 1932, in Utica, the son of Albert and Barbara Loin. He was a graduate of Utica Free Academy, where he played on the baseball team and sang in the a cappella choir. Walt later attended Mohawk Valley Community College and Cornell University, taking courses on law and public administration. On February 17, 1984, Walt married Paula Tantillo Cucharale in St. Mark’s Church, a union of 37 years. One of Walt’s proudest accomplishments was his time served as Justice of the Peace for the town of Deerfield. Walt was passionate about his time on the bench and presided honorably for over 40 years. Walt also took pride in officiating weddings throughout the community. In earlier years, Walt enlisted in the Army during the Korean War. He served with a top security clearance on the Armed Forces Special Weapons Project at Sandia Base in Albuquerque, New Mexico. His duties included maintenance and testing of the nuclear arsenal. After his military service, Walt was a supervisor in the engineering department of the New York Telephone Company for 35 years. Throughout his career he worked on some of the largest construction projects in Oneida County. Walt was an avid outdoorsman. From a young age, he hunted and trapped across the Mohawk Valley. His prowess as a trapper was even featured in several sporting magazines. When Walt was not hunting or trapping, he was cheering on his favorite team, the NY Yankees! Walt and Paula were also active members of the Our Lady of Lourdes Church, where Walt served as a eucharistic minister. When not attending Church, Walt and Paula enjoyed spending time with their family and lifelong friends. Walt is survived by his beloved wife, Paula; his three loving children, Walter John (Jody) Loin, Fairfield, IA, Mary Lourdes (John Hauselt) Santana, Burlingame, CA and Kate (Tony) Loin-Barron, Coronado Island, CA; step-children, Christopher Cucharale, Westmoreland, NY and Damien DePaolis, New York, NY; daughter-in-law, Cathy Cucharale with whom he shared a special bond; sister, Tecla Kondzielawa; grandchildren, Chelsea Van Es, Noah Loin, Andrew and Mary Alexandra Santana, and Deanna and Daniel Cucharale; great-grandchildren, Skylar and Rhyus Van Es; nieces and nephews, Richard (Mary Ann) Jordan, Barbara Jordan, Joanne (Robert) Walaszewski, Michael (Karen) Loin, Melissa Campbell, Michelle Blackburn; and in-laws Maria Gay Tantillo, Fred and Lucia Frontera, Gina (Francis) Marchio and Virginia Loin. Walt was predeceased by his former wife, Jean Loin; sisters, Mary Jordan and Barbara Dydula; and brothers, John Loin, Joseph Loin, and Frank Loin. A Celebration of Walt’s Life will be held at a later date. Remembrances in Walt’s name may be made to the Church of Our Lady of Lourdes, 2 Barton Ave., Utica, NY 13502. As one of the thousands of victims of the Covid-19 pandemic, Walt was grateful for the frontline workers and health care providers who risked their lives to care for others. His dying wish was for everyone to take the virus seriously and slow the spread of the deadly disease.

The family of Walter V. Loin created this Life Tributes page to make it easy to share your memories.

Send flowers to the Loin family.