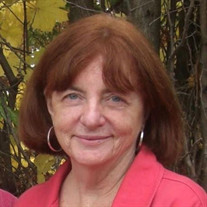 UTICA - Virginia (“Ginger”) Kane Parker, 80, of Clinton, NY passed away on January 13, 2021 from complications of glioblastoma. Though her illness changed her active and adventurous life, she was a strong and resilient person who challenged the medical prognosis given to her and lived vibrantly for 9 years after diagnosis. Ginger was born on November 30, 1940, in Stamford, CT to Henry and Frances (Bertana) Kane, the oldest of four children including Elizabeth (Bette) Mann, Frances Richmond, and Thomas Kane. She graduated from Stamford High School in 1958 and attended the University of Bridgeport, studying education and art. In 1961 she left college to marry her high school sweetheart, Charles Bruce Parker, and start their family. They had four children over the next ten years, and as a military family, moved frequently. Their four children were each born in different places: Vermont, Connecticut, Kentucky, and Washington DC. They also spent several years in Alaska, finally returning to Connecticut on an epic road trip in their VW Van with three kids, a dog, and a turtle. Ginger approached parenting as a grand adventure. She was a creative and loving mother, who made homemade Halloween costumes, hand-drawn Christmas cards and home-baked birthday cakes, and also took her kids to concerts and foreign films, encouraged their creativity, and avidly supported them in all their endeavors. The family settled in Clinton, NY in 1976, where they moved into the former house of artist William Palmer, a home where Ginger could pursue passions in art and gardening. Ginger was a lifelong learner, and in 1980 she continued her education at Utica College, completing her bachelor’s degree in Public Relations and Journalism. Post-graduation, she began a long career that combined her many interests. She worked many jobs over the years from the ARC, Oneida National Bank, and Stetson-Harza to a much-loved position at the Munson Williams Proctor Institute before finishing her career as the Director of the MVILR Program at SUNY. She worked there until her illness forced her to retire, begrudgingly, in 2011. Ginger was a beloved figure in the community, an artist, and a passionate advocate for the arts. She served on numerous boards and non-profit organizations, and volunteered countless hours of her time. Her proudest legacy, however, was her volunteer work as the creator and director of the Kirkland Art Center Coffeehouse series. “The Coffeehouse” began in 1984 with an Irish concert featuring local musicians and culminated more than 30 years later with a concert by Ginger’s musical idol Joan Baez. Under Ginger’s leadership, the KAC Coffeehouse presented hundreds of concerts to the community, from local artists to international bands to legends of the Folk and Bluegrass genre, including Arlo Guthrie, Alison Krauss, Odetta, Peter Rowen, and Ralph Stanley. During these years, Ginger made countless friends and fans who credit her with helping to build a music community in Central New York. After Ginger’s 30-year marriage ended, she started a new chapter of her life with her partner, artist Karen Christensen. For 25 years, they enjoyed a beautiful and creative life brimming with art, music, humor, grandchildren, dear friends, cats, gimlets, gardening, and travel. Ginger is predeceased by her former husband, Bruce, as well as her partner, Karen. She is survived by her children, Jennifer Parker-Starbuck, Jed Parker, Jeff (Dannelle) Parker, and Molly Parker-Myers and their families, including her beloved grandchildren Zeena Starbuck, Evan and Maggie Parker, Hazel and Flora Parker-Myers, each of whom brought her great pride and joy. Ginger had extraordinary energy and a passion for life. Even after her glioblastoma surgery and subsequent physical limitations, her favorite line was, “So what are we going to do next?” Family and friends assisted her with traveling, concert-going, museum, theatre, and restaurant excursions and anything else that would allow her to experience new adventures. Everywhere she went she found friends, old and new – everyone knew and loved Ginger! During this time of COVID, there is no adequate way to thank the heroic caregivers in hospitals and Nursing Homes, but we would like to take a moment to thank the amazing staff at the Katherine Luther Home for their care during the pandemic, and for assisting Ginger in connecting with family and friends several times each week. In lieu of flowers please consider a donation to the Kirkland Art Center, the Munson Williams Proctor Institute, or any other arts organization of your choice. Due to COVID, we are unable to come together to celebrate Ginger’s amazing life, but hope to do so in the future when we can gather together again. Arrangements are under the direction of McGrath, Myslinski, Karboski & Nunn Funeral Directors, 470 French Rd., Utica.

UTICA - Virginia (&#8220;Ginger&#8221;) Kane Parker, 80, of Clinton, NY passed away on January 13, 2021 from complications of glioblastoma. Though her illness changed her active and adventurous life, she was a strong and resilient person who... View Obituary & Service Information

The family of Virginia K. Parker created this Life Tributes page to make it easy to share your memories.

Send flowers to the Parker family.