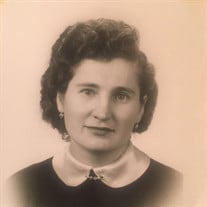 UTICA- Veronica Kusnierz, 94, passed away on January 11, 2021, at the Pines at Utica. Veronica was born in Nisko, Poland on October 12, 1926, the daughter of Jan and Maria Oczkowski. She came to America in 1951 and in 1953 married Francis Kusnierz in Holy Trinity Church in Utica; a blessed union of 57 years until his passing in 2010. Veronica was employed by General Electric for several years and was a lifelong member of Holy Trinity Church where she volunteered in many different capacities, including holiday decorating of the Church, making pierogis for the various church functions and assisting with the weekly Bingo games played on Saturday evenings. She was an active member of several Polish heritage/ cultural organizations including the White Eagle Society, Kopernik Memorial Association and the Polish Community Club, where she also contributed her culinary talents to making pierogis. Veronica is survived by her sisters Stella Rdzanek and Aniela Matyszczuk of Utica, several nieces, nephews, grandnieces, grandnephews, a great-grandnephew and great-grandniece, living in New York, Florida, Maryland, Massachusetts and Tennessee, and cousins in New Jersey, Canada and overseas in Poland. She was predeceased by her parents, husband Francis, brother Joseph Oczkowski, sister Sophia Oczkowski, brother-in-law Thaddeus Rdzanek, sister-in-law Irene Oczkowski, and nephew Mark Matyszczuk. Relatives and friends are invited to attend a Mass of Christian Burial to be celebrated on Wednesday, April 14, 2021, at 11:30 a.m. at Holy Trinity Catholic Church. Interment will be in Holy Trinity Cemetery. Donations in her memory may be made to the Holy Trinity Memorial Fund,1206 Lincoln Avenue, Utica, NY 13502. Arrangements are under the direction of Kowalczyk Funeral Home, 470 French Rd., Utica. Messages of sympathy can be added at kowalczykfuneralhome.com

UTICA- Veronica Kusnierz, 94, passed away on January 11, 2021, at the Pines at Utica. Veronica was born in Nisko, Poland on October 12, 1926, the daughter of Jan and Maria Oczkowski. She came to America in 1951 and in 1953 married Francis Kusnierz... View Obituary & Service Information

The family of Veronica Kusnierz created this Life Tributes page to make it easy to share your memories.

Send flowers to the Kusnierz family.