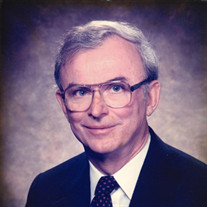 NEW HARTFORD - Dr. Thomas F. Spath passed away Tuesday, January 12, 2021, due to Covid-19-induced pneumonia, in the presence of his beloved wife Mary. Tom was born to Catherine McCabe Spath and Frank J. Spath on May 27, 1933, in Albany, NY. He grew up with his sister Marilyn in Albany, where he attended Christian Brothers Academy. After CBA, Tom attended Fordham University in New York City and graduated in 1954. In pursuit of his dream to become a doctor, he went on to Albany Medical College, graduating in 1958. On February 20, 1960, he married the love of his life, Mary Ellen McGinn, at St. Vincent de Paul Church; he often referred to marrying Mary as the best decision he ever made in his life. Tom and Mary were soon blessed with Thomas John, born in Albany in 1961. The young couple moved to Utica, NY in 1962 as Tom started his medical practice. The family grew quickly: Michael Francis was born in 1962, Robert James in 1963 and Monica Anne in 1966. In 1967, Tom was drafted into the U.S. Navy. Over the next two years, he served his country as a Commander stationed at the U.S. Naval Academy in Annapolis, MD. While in the Navy, the family was blessed with the arrival of Catherine Mary in 1967. After Tom’s service, the family returned to upstate NY and settled in New Hartford, where Tom continued to practice medicine for the next forty years. Tom was Board Certified in internal medicine and geriatrics and was a Fellow of the American College of Physicians (FACP). He served as President of the Faxton Hospital Medical Staff and President of the Oneida County Medical Society. Tom loved being a doctor. He relished combining his intellectual curiosity with the simple pleasure he received from helping people. His kind, knowledgeable and thorough approach to the practice of medicine earned him the respect of his peers and the admiration and love of his patients. He worked long hours and made house calls long after most other doctors had stopped doing so. He was, in the most positive sense of the term, an “old school” doctor. Tom tried to impart his passion to his children, taking them on rounds at the local hospitals so they could see him in action, helping people get well. While his older children loved spending time with their dad at work, medicine was not their calling. But for his fifth child, Catherine Mary, it was. Dr. Catherine Spath continues the family tradition today as an orthopedic surgeon in Holyoke, MA. Tom and Mary loved to cycle. They went on biking vacations throughout the U.S. and Europe. Tom loved playing golf with his friends at the Yahnundasis Golf Club and cherished his weekly game of bridge. Family gatherings were never truly complete without time spent at the bridge table. Tom was a devoted Catholic and his faith was a source of comfort for him throughout his life. He was always grateful for the spiritual leadership provided by Father Paul Drobin. Husband. Father. Doctor. Tom embodied the ideal of a life well-lived. Tom is survived by his wife Mary, his son Thomas and partner Melissa Algaze, his son Michael and daughter-in-law Diane, his son Robert and daughter-in-law Gwen Bernardo, his daughter Monica, his daughter Cathy and daughter-in-law Kate Kruckemeyer, his sister Marilyn and brother-in-law Fred Heider, and his grandchildren Alexandra, Brigette, Madeleine, Dashiell, and Caroline. In lieu of flowers, contributions in Tom’s memory may be made to the charitable organization of your choice. A private burial will be held on Monday, January 18. A memorial service celebrating Tom’s life will be held at a later date.

NEW HARTFORD - Dr. Thomas F. Spath passed away Tuesday, January 12, 2021, due to Covid-19-induced pneumonia, in the presence of his beloved wife Mary. Tom was born to Catherine McCabe Spath and Frank J. Spath on May 27, 1933, in Albany, NY.... View Obituary & Service Information

The family of Dr. Thomas F. Spath created this Life Tributes page to make it easy to share your memories.

Send flowers to the Spath family.