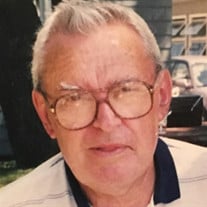 New Hartford - Thomas M. Everson, Sr., 90, passed away on July 7, 2018, at Sitrin Health Care Center, surrounded by his loving family. Tom was born on September 24, 1927, in Utica, New York, the son of J. Raymond and Ella Murphy Everson. He graduated from Utica Free Academy in 1946 and attended Utica College. Also in 1946 he enlisted in the United States Marine Corps serving two years after earning the rank of Corporal. In February of 1953, Tom began his employment with General Electric, where he worked until his retirement in 1989. On July 11, 1953, he married Mary Lourdes Briggs in the Church of Our Lady of Lourdes. Tom was a communicant of the Church of Our Lady of Lourdes and attended Mass daily. Tom was a devoted husband and loved spending time with his children and grandchildren. He was known to be a true gentleman with great integrity and a quick wit. Tom was an avid sports enthusiast and a true Yankee fan. He coached many years of Little League and Babe Ruth, he never missed his children or grandchildren’s games. Tom was a member of the America Legion Utica Post 229. Surviving besides his beloved wife, Mary Lourdes, he leaves his greatest gifts from God, his nine most cherished, most loved, most special blessings, Mary Therese Flanagan of Massachusetts, Dr. Kathleen Everson of Texas, Colleen Gastonguay and her husband, Michael of Arizona, Tom Everson, Jr. and his wife, Beth of Whitesboro, Rosemary Chruscicki of Marcy, Zoe Tomaino and her husband, Stephen of New Hartford, Gretchen Mulvihill and her husband, Michael of Dewitt, Daniel Owen Everson of Deerfield, and Ellen D’Agostino and her husband, Billy of Syracuse. Also surviving are twenty-nine beloved grandchildren, six great grandchildren; three sisters-in-law and one brother-in-law, Margaret Ball of Syracuse, Ginger and Don Zillioux of New Hartford and Katherine Briggs of Massachusetts; and several nieces, nephews, and cousins. Tom was predeceased by his brothers-in-law, Don Ball and Jack Briggs. Relatives and friends are invited and may call on Friday from 4-7 p.m. at McGrath, Myslinski, Karboski & Nunn Funeral Directors, 470 French Rd., Utica. Funeral Services will be Saturday at 11 a.m. at the Church of Our Lady of Lourdes, where a Mass of Christian Burial will be celebrated. Interment will be in Mt. Olivet Cemetery, Whitesboro. In lieu of flowers, please consider remembrances in Tom’s name to St. Jude Children’s Research Hospital. Envelopes will be available at the funeral home. The Everson family wishes to offer a sincere thank you to the staff of the Sequoia House at Sitrin Health Care Center for the wonderful care and kindness given to both Tom and his family. Visit Thomas's Tribute Video here: https://www.tributeslides.com/tributes/show/SJ2GSNFM52F5X83C

The family of Thomas M. Everson Sr. created this Life Tributes page to make it easy to share your memories.

Send flowers to the Everson family.