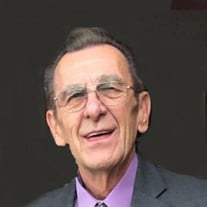 MARCY – Stephen “Steve” Zuchowski, 78, passed away on December 21, 2020, at Faxton-St. Luke’s Healthcare. Steve was born on July 7, 1942, the son of the late Stephen J. and Anna (Zacharko) Zuchowski. He was a graduate of UFA. On September 30, 1989, Steve married Debora Burdick in the Big Moose Community Chapel. He served his country in the U. S. Army, stationed in Germany during Vietnam. Steve worked at Friedrich Climate Master (International Heaters) and was later a Corrections Officer at Oneida Correctional Facility then Mohawk Correctional Facility. Steve was a devoted husband and the best father that his sons could ask for. He was an extraordinary man in a very ordinary way. Steve is survived by his beloved wife, Debora, Marcy; five sons, Stephen Joseph Zuchowski, Hubbardsville, Peter Jensen, North Utica, Chris Jensen, Brookfield, Matthew Thomas Zuchowski, Marcy, and James Lucas Zuchowski, Clinton; brother and sister-in-law, Thomas and Carol Zuchowski; several nieces, Virginia Ann, Ann Elizabeth, Chloe and Carys; great-nieces, a great-nephew and cousins; sister-in-law, Brenda Jones and her companion, Tyger Park; in-laws, Sherrill “Butch” and Linda Burdick. He also leaves his beloved canine companion, Cooper. Relatives and friends are invited and may call on Monday from 4-6 p.m. at Kowalczyk Funeral Home, 470 French Rd., Utica. In keeping with safety guidelines, we will be rotating visitors 10 at a time to limit our capacity to no more than 25 people at once. Private interment will be at the convenience of the family. Remembrances in Steve’s name may be made to a charity of your choice. Steve’s family would like to acknowledge Jeff Hull, who was like a son to him, Bill Duncan and Dr. Cherakuri for the care and compassion shown to him in his time of need.

The family of Stephen M. Zuchowski created this Life Tributes page to make it easy to share your memories.

Send flowers to the Zuchowski family.