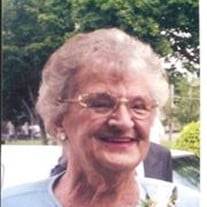 Stella Belch Utica Stella Belch, 90, a lifelong Utica resident died on Thursday, September 02, 2010 at the Allen Calder S.N.F., of Faxton-St. Luke's Healthcare in New Hartford She was born in Utica on October 2, 1919, the daughter of Wojciec and Anna Gravety Ziajka and attended local schools. Stella was married to Thaddeus (Ted) Belch on November 4, 1942 in Holy Trinity Church, a blessed union for over 66 years until his death on October 31, 2008. Stella was employed with General Electric in Utica for over thirty years as an assembler until her retirement in 1979 and was a member of Holy Trinity Church. Her survivors include a daughter, Theodora (Teddie) Schafer of Whitesboro; a grandson Michael Schafer of Oneida Lake, NY; a granddaughter, Holly and her husband Jonathan Pawlika of Oneida, NY; two great-grandchildren, Jake and Lauren Pawlika. She was predeceased by her sisters, Mary Malecki, Florence Sokolowski, Victoria Ziajka and Josephine Bolanowski; a brother, Edward Ziajka; a son-in-law, Paul Schafer. Funeral services will be private and held at the convenience of the family. Burial will take place in Holy Trinity Cemetery. Stella family would like to extend their sincere appreciation to the nurses and staff of the Allen Calder S.N.F. 2nd Floor for the excellent care and compassion she received. In Stella's name, memorial contributions may be made to the Holy Trinity Memorial Fund, 1206 Lincoln Avenue, Utica, NY 13502. Arrangements are under the care of the Kowalczyk Funeral Home, 1156 Lincoln Avenue, Utica. Light a Candle at www.kowalczykfuneralhomes.com

The family of Stella Belch created this Life Tributes page to make it easy to share your memories.

Send flowers to the Belch family.