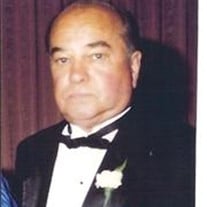 Stanley Urban Utica Stanley J. Urban, 82, a lifelong area resident died on Saturday, September 26, 2009, at Faxton-St. Luke's Healthcare. He was born in New York Mills on August 23, 1927, the son of Stanley and Mary Chaczyacz Urban and attended local schools. Stanley served proudly with the US Navy during WWII as a Sea Bee. On September 19, 1947 he was married to Genevieve Oczkowski in Holy Trinity Church; a loving union shared for over 62 years. He was employed as a meat cutter for C.A. Durr Meat Packing Co. and later retired from P&C Super Markets. Stanley enjoyed flying and had received his pilot's license at the Highland Airport in Frankfort. He enjoyed fishing at the St. Lawrence Seaway, hunting and was an enthusiastic NY Mets fan. Stanley coached baseball for the Bob Bernie Little League Post 229. His survivors include his beloved wife Genevieve of Utica: two daughters, Deborah and her husband Richard Dudek of Canastota, NY and Cynthia Urban of Utica; four sons, Stanley and his wife Judy Urban of Endwell, NY, Gregory and his wife Peggy Urban of Sidney, NY, Steven and his wife Joanna Urban of Cicero, NY and John and his wife Cheryl Urban of Liverpool, NY; two sisters, Josephine Gaska of Utica and Nellie Marshall of Albany. He also leaves behind nine grandchildren, Bethany, Sarah, William, Steven, Christopher, Jessica, Jason, Matthew and Joseph; one great-grandchild, Edward, several nieces, nephews and his loyal companions, Duchess and Lucky. He was predeceased by three brothers, Henry, John and Ernest; four sisters, Sadie Mikuta, Celia Hill, Helen Roemer and Adeline Dzuira; Funeral services with Military Honors will be held on Tuesday at 4 p.m. at the Kowalczyk Funeral Home, 284 Main Street, New York Mills, Relatives and friends may call on Tuesday from 2pm until the time of the service. Burial will be held at the convenience of the family. Stanley's family would like to express their sincere appreciation to Dr. Timothy LaFont and Dr. Ira Tisch for their gratitude and care shown to Stanley and his family and also to Dr. Kevin Mathews of Hospice for the kindness and compassion Stanley had received. Memorial contributions in his name may be made to the Hospice & Palliative Care Inc., 4277 Middle Settlement Road, New Hartford, NY 13413 and to the Rome Humane Society, 6247 Lamphear Road, PO Box 4572, Rome, NY 13442. Envelopes will be available at the funeral home. Light a Candle at: www.kowalczykfuneralhomes.com

The family of Stanley J. Urban Jr. created this Life Tributes page to make it easy to share your memories.

Send flowers to the Urban family.