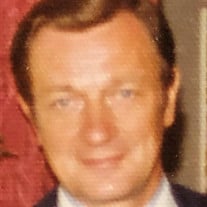 PROVIDENCE, RI – Stanley B. Gwizdak, Sr., 96, formerly of Utica and Orlando, FL, passed away peacefully into the loving arms of the Lord on Thursday, April 15, 2021, at Our Lady of Fatima Hospital, Providence, RI. Stanley was born on November 5, 1924, in Little Falls, NY, the son of Jan and Casimierza (Szymanski) Gwizdak - the eldest of five children. He was a graduate of Utica Free Academy. He worked during the Depression to support his family and convinced his parents to let him enlist in the US Marine Corps upon turning 17, less than two weeks before the Japanese attack at Pearl Harbor, as America entered World War II. He saw combat on Guadalcanal, Cape Gloucester, and Peleliu in the South Pacific. He did all this before he turned 20. He would later be mobilized for the Korean War as a small arms instructor in the US. He was the constant “Rock” of the family who ardently believed in keeping one’s word and fulfilling obligations and responsibilities regardless of the cost. He passionately loved history, especially military history. Later in life he grew to have a profound concern for animals, especially strays and those in shelters. He was also well known for a delicious, laser-like sense of humor that no words can adequately capture. After the war, he served in intelligence and analysis for the remainder of his working career. He retired from the US Department of the Air Force. Stanley was predeceased by his beloved wife, Georgina (Hopkins), on September 18, 2012; his parents, Jan (1987) and Casimierza (1977); his sister, Jane; brothers, Daniel and Henry, and sister, Felicia (Phyllis). Surviving are his four children, Stanley B. Gwizdak, Jr., Phoenix, AZ, Eugene V. Gwizdak, Providence, RI, Meegan Fixler, Vero Beach, FL, and Allyson Cohen, Oak Park, MI. He is survived by several grandchildren and great-grandchildren. Funeral services will be private for the family under the direction of Kowalczyk Funeral Home, Utica. Interment will be in Holy Trinity Cemetery, Yorkville. Remembrances in Stanley’s name may be made to any animal rescue organization.

PROVIDENCE, RI &#8211; Stanley B. Gwizdak, Sr., 96, formerly of Utica and Orlando, FL, passed away peacefully into the loving arms of the Lord on Thursday, April 15, 2021, at Our Lady of Fatima Hospital, Providence, RI. Stanley was born on... View Obituary & Service Information

The family of Stanley B. Gwizdak Sr. created this Life Tributes page to make it easy to share your memories.

Send flowers to the Gwizdak family.