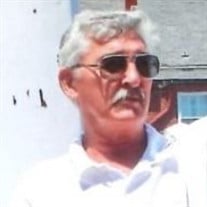 UTICA – Stanislaus (Stan) Czternastek, 69, passed away on Monday, April 18, 2022, in the comfort of his own home. Born on December 25, 1952, in Utica, Stan is the son of John and Helen (Kolic) Czternastek. He was a graduate of Utica Free Academy and attended Mohawk Valley Community College after his service in the United States Army during the Vietnam War. On September 21, 1978, Stan married RoseMarie Wolak in Sacred Heart Church; a union of 33 years prior to her death on May 18, 2012, and to whom he remained devoted until his passing. Stan was a Renaissance Man, having been a multi-sport athlete in high school; a soldier, and a jack-of-all-trades as a largely self-taught woodworker, mechanic, plumber, mason, electrician, lumberjack. Of all his professional work, he was proudest of his time working on the railroads with Amtrak and of his service to the state of New York as an Officer of Corrections until his retirement. He is survived by his son, Philip Czternastek; step-children, Nathan Johnston and Shannon Brown; sister, Rose Czternastek; nephews, Randy and Thomas Czternastek and great-nephews, Peyton, Kody, Brayden, and Keagan. Stan was predeceased by his brothers, Joseph and Richard. Relatives and friends are invited and may call Monday, April 25, 2022, from 4 to 6 p.m. at McGrath, Myslinski, Karboski & Nunn Funeral Directors, 470 French Rd., Utica. Graveside services will be in Holy Trinity Cemetery, Yorkville. In lieu of flowers, remembrances in Stan’s name may be made to the World Central Kitchen (https://wck.org/relief/activation-chefs-for-ukraine) and Anita’s Stevens Swan Humane Society (https://www.anitas-sshs.org/). Envelopes will be made available at the funeral home.

The family of Stanislaus "Stan" Czternastek created this Life Tributes page to make it easy to share your memories.

Send flowers to the Czternastek family.