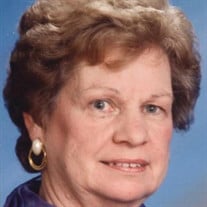 NEW HARTFORD-Shirley A. Abounader, 88, passed away on Monday, March 28, 2022, at The Presbyterian Home. Shirley was born in Malone, NY, on February 23, 1934. She was the sixth child of thirteen born to Amos and Anne (Stowe) Tucker. Shirley moved to Utica, NY where she met and later married her husband Richard S. Abounader on June 21, 1952, at St. Louis Gonzaga Church. Together they raised two children and spent 68 years together, until his passing on February 22, 2021. Shirley was a member of the UFCW union worked many years for various grocers from 1952 until 1985. After leaving her career with the grocers, Shirley provided daycare for many neighborhood children for another 15 years before becoming a part-time aide at New York Mills School where she finally decided to retire in 2012. Shirley was a loving wife, mother, grandmother, great-grandmother, and a very devoted friend. She was a very spiritual person and very devoted to her faith and church. Shirley was a member of the St. Mary’s Guild at St. Louis Gonzaga Church for many years. Shirley will be greatly missed by her daughter and son-in-law, Regina and Gary Kostera; son and daughter-in-law, David and Sandy Abounader; grandchildren, Kaylee and Russell Anderson IV, Jordan Kostera, Jamie Abounader, David Abounader II; and great-grandchildren; Dominick Abounader, and Russell Anderson V. She is also survived by six of her siblings and their families; Betty, Ethel, Joyce, Linda, Harold, and Bradley; as well as her brothers-in-law Joseph, Fred, and Robert Abounader and their families. A special thank you to the staff of the Trenton Unit at The Presbyterian Home for the care and comfort extended to Shirley and her family throughout Shirley’s stay. The Divine Liturgy of the Faithful Departed will be held on Friday, April 1, 2022, at 9:00 am at St. Louis Gonzaga Church, 520 Rutger St., Utica. The Mass will be held to jointly celebrate the life of Shirley and her husband, Richard S., who passed last year. The family will receive guests following the Mass. Interment will be at Holy Trinity Cemetery. In lieu of flowers, please consider donations to St. Jude Children's Research Hospital (www.stjude.org). Arrangements are under the direction of McGrath, Myslinski, Karboski & Nunn Funeral Directors, 470 French Rd., Utica.

NEW HARTFORD-Shirley A. Abounader, 88, passed away on Monday, March 28, 2022, at The Presbyterian Home. Shirley was born in Malone, NY, on February 23, 1934. She was the sixth child of thirteen born to Amos and Anne (Stowe) Tucker. Shirley... View Obituary & Service Information

The family of Shirley A. Abounader created this Life Tributes page to make it easy to share your memories.

Send flowers to the Abounader family.