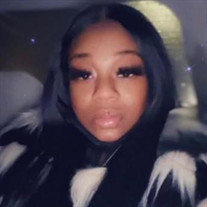 Shayvon Denise Henry departed this life on January 27, 2022, surrounded by her family, at St. Elizabeth medical center in Utica, NY. Shayvon made her grand entrance into the world on August 14, 1985, at Columbia Presbyterian Hospital in NYC, born to Lashawn Pace and the late Shawn Henry. She grew up in New York City where she attended P.S. 155, I.S. 303, and Abraham Lincoln High School in Brooklyn. Shayvon attended Mandl to become a dental assistant and received her dental assistant certificate. She accepted God in her life at a young age and attended church with her grandmother, mother, and brothers. Shayvon had a beautiful singing voice and sang in the youth choir. She moved to Utica, NY to join her mother and her brothers. Shayvon was a woman of many talents. She worked in customer service for different companies. Shayvon was a great cook. She was pursuing many business ventures. She started her brand, SBS, selling eyelashes, cosmetics, purses, and other merchandise. She was a force to be reckoned with. Shayvon made sure that you knew that you were loved but didn’t mix words when she didn’t agree with you!! That Leo Lion was something else. Shayvon sought to provide a better life for herself and her birthlings (as she so lovingly referred to the children). She recently began to have heart problems but never let that stop her from doing the things that she loved. She leaves to cherish her memories, her mother, Lashawn; step-father, Derrin; her three heartbeats, Christian Jaquan, Taraji Cori, and Rashawn Amir; siblings, Carl (Vanessa), Kevin, and Derrin, Jr. (also referred to as Boo-boo); sisters; Shakia, Safiya, Shawntia, and Taya. Shayvon also leaves behind the apple of her eye, her grandmother, Elizabeth Goodwin (known as “Mema”); her grandfathers, Nathan (known as “Goodie”) and Pastor James W. Lilley, along with a host of nieces and nephews that include Nyaria, Ka’Ren, Jhada, and Daquan, Carl, Kaeshawn and Kartier; Godmothers by love, Vivian White and Karen Moats; and a host of aunts uncles, cousins and friends whom she loved so much. Honorable mentions to Christopher Wilder and Corey Pollard whom Shayvon loved dearly. Funeral services will be private at the convenience of the family. Arrangements are under the direction of McGrath, Myslinski, Karboski & Nunn Funeral Directors, 470 French Rd., Utica.

Shayvon Denise Henry departed this life on January 27, 2022, surrounded by her family, at St. Elizabeth medical center in Utica, NY. Shayvon made her grand entrance into the world on August 14, 1985, at Columbia Presbyterian Hospital in NYC,... View Obituary & Service Information

The family of Shayvon Denise Henry created this Life Tributes page to make it easy to share your memories.

Send flowers to the Henry family.