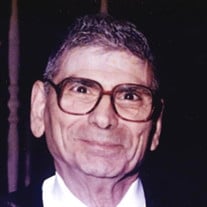 UTICA – Samuel D. Convertino, 92, passed away peacefully into the arms of the Lord on Tuesday, March 30, 2021 at the Masonic Care Community. He was born on June 11, 1928, in Utica, the son of the late Anthony and Catherine (Brunetto) Convertino. Sam was an avid bowler, belonged to several Veteran’s Clubs, enjoyed watching vintage movies, and spending time with family. He was a man of faith who enjoyed traveling to religious shrines. Sam was a quiet man and a humble hero. Sam served his country bravely in the U. S. Army during the Korean Conflict. One of his responsibilities was retrieving both wounded and fallen US soldiers during combat. Upon returning home Sam was employed at Kelsey Hayes in Utica until he retired. Sam had a very close relationship with his sisters. Angie who lived to be 100 and Mary who passed away last month at age 96. They are now peacefully united. Sam is survived by his loving nieces, nephews, Elaine Ciccone (Paul) Hage, Joanne Ciccone (Peter) Burns, Vincent (Sharon) Ciccone and Gary (Addy) Landrio; great-nieces and great-nephews, Marie Hage, Peter and Paul Landrio and David and Luke Ciccone. He was predeceased by his sisters, Angie (Eugene) Landrio and Mary (Andy) Ciccone; child brother, Angelo Convertino. Relatives and friends are invited to attend a Mass of Christian Burial to be celebrated on Tuesday at 10 am at Historic Old St. John’s Church, Utica. Family will receive guests after the Mass. Entombment will be in Calvary Mausoleum. Those wishing to view Sam's Mass may do so at https://youtu.be/8jym2wSCc2w In lieu of flowers, remembrances in Sam’s name may be made to the Historic Old St. John’s Choir Organ Fund. Envelopes will be available at the Mass.

UTICA &#8211; Samuel D. Convertino, 92, passed away peacefully into the arms of the Lord on Tuesday, March 30, 2021 at the Masonic Care Community. He was born on June 11, 1928, in Utica, the son of the late Anthony and Catherine (Brunetto)... View Obituary & Service Information

The family of Samuel D. Convertino created this Life Tributes page to make it easy to share your memories.

Send flowers to the Convertino family.