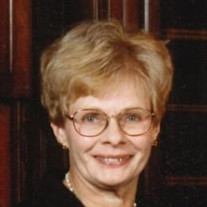 ROME – Sally L. Majka, 81, passed away on Thursday, January 28, 2021, peacefully in the comfort of her home. Sally was born on February 5, 1939, in Utica, the daughter of Adam and Bertha (Willgos) Lachut. On June 26, 1966, Sally married Donald J. Majka in Holy Trinity Catholic Church, a blessed and mutually supportive union of 54 years. Sally grew up in a modest home on Spring St., in the brewery district of West Utica. She attended Holy Trinity School and UFA. After high school, she earned a Bachelor’s Degree from Utica College and continued her education at Syracuse University where she earned a Master’s Degree in Education. Later, she attended Catholic University, Washington, D.C., attaining a Master’s Degree in Library Science. Her great love was the teaching of children, she taught at Vernon-Verona-Sherrill, the Potter’s School in Utica’s inner city, and Fairfax County School District, Fairfax, Virginia. Sally can be characterized by a statement that she made at her retirement celebration, “Some of my days were good, all of the rest were wonderful.” After retirement, Sally returned to Utica where she was involved in volunteer work for political, educational, and civil organizations. Eventually, she joined the staff of Congressman Sherry Boehlert and was elected to the Board of Trustees at Utica College. She was a generous person, having established scholarships at Utica College for students in need. She also funded several prizes for the Utica College Science Fair. Sally also was a conservationist working with Don to manage 1,000 acres of forest land and planting 60,000 seedling trees in the north country. She was also an avid quilter. She is survived by her beloved husband, Donald, Rome, and her sister, Pauline Lachut, Whitesboro. Sally will be missed by those who loved her. Relatives and friends are invited and may call Wednesday from 9 to 10 a.m. at Kowalczyk Funeral Home, 470 French Rd., Utica. Funeral services will commence at 10 a.m. from the funeral home and a Mass of Christian Burial will be celebrated at 11 a.m. at Holy Trinity Catholic Church. Interment will be in St. Stanislaus Bishop & Martyr Cemetery, Whitesboro.

The family of Sally L. Majka created this Life Tributes page to make it easy to share your memories.

Send flowers to the Majka family.