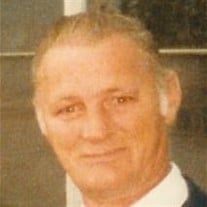 SCHUYLER - Roy Scott, 85, passed away Saturday, April 20, 2019, at Faxton-St. Luke’s Healthcare with his family by his side. He was born on October 24, 1933, in Syracuse. On June 28, 1963, Roy married Virginia Chrystie in New York Mills, a union of 55 years. He was employed as an appliance repairman with Dave Hayes Appliances prior to retiring. Roy was a loving husband, father, and grandfather. He enjoyed cooking, his music video collection and the occasional trip to the casino. Roy is survived by his beloved wife, Virginia; 4 children, Carl Scott, Hawaii, Renee Scott, Sherrill, Randy Scott, Deerfield and Kevin Scott, Schuyler; 5 grandchildren, Chad, David, Danny, Matt and Andrea; daughter-in-law, Nancy Scott, Florida; his close friend, Joe D. and his K-9 companion, Rosco. Funeral services will be at the convenience of the family.

The family of Roy Scott created this Life Tributes page to make it easy to share your memories.

Send flowers to the Scott family.