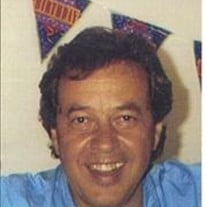 Ron Wakeel, 69, of Boca Raton, Fla. and formerly of New Hartford met his maker on April 26, 2009 only months after the onset of an aggressive cancer. He died peacefully at home with his loving family and friends by his side. Born in Utica on Feb. 16, 1940, the son of John and Anna Wakeel, he was educated in Utica Schools. On June 29, 1963, he wed Linda Corn, creating a loving union of 45 years. Ron may have died peacefully, but, his life generally was anything but. He was a real character to all those who knew him. He began his long career when he took over the family business, Wakeel's Mens Shop upon the untimely death of his father. Thrust into being the sole support to his family, he developed an incredible work ethic that continued until his death. As hard as he worked, he was unfortunately easily distracted because his family counted over 40 various business ventures over the years. He ran clothing stores, nightclubs, restaurants, and bars. He owned and operated the Ramada Inn in New Hartford with his brother, Roger for 15 years until he "officially" retired in 1987, but, that hardly slowed him down. During this time, he was also in the music industry managing the local band, SAIL, and was able to secure a national record label. Upon retirement, he and Linda then moved to Fla. and shortly after opened Crocco's Sports Bar with his partner and friend, Mike Crocco. He also got involved in the import/export business, Managed Sandy Shoes Restaurant, and ran Solid Gold. Even with all his hard work, he really knew how to have a good time. Always the first to buy a round of drinks and keep the tab open, it was hard to spend your money when you were with Ron. Generous to a fault hardly begins to describe him. His favorite places to bring friends were Sylvan Beach, Saratoga Springs and Lake George. Ron is survived by his wife, Linda, who he loved with all his heart, as well as his children and their spouses, Kristin and Mark Chanatry of New Hartford and their children, Ashley and Mark; Kira and Bob Tedesco of KY and their children, Bobbi Nicole and Luke; his beloved son, Matthew of Boca Raton and. his best buddy, his dog Indo. He also leaves his brother, Roger and wife Cheryl of Clayton; two sisters, Joyce and Andrew Zammiello of Utica, and Deanna and husband George Gish of Las Vegas. Ron also had a great influence on the entire Corn family, which includes his in-laws, Michael and Jan Corn, Marcia and Tom Ciola, Tim Corn, Peter Corn, Sheila and Tim Savoy and David and Nora Corn. He also leaves many nieces and nephews. Also included are his special friends who were extremely supportive when he was healthy and ill, Eddie and Joyce Casper, Pat and Sharon Talerico, John and Barbara Gwilt, Chuck and Gerri Natale, Albert and Eleanor Mazloom, Andy and Shirley Kowalczyk, Joe and Cynthia Kowalczyk, Tommy and Ginny DeGironimo, Basil and Ann McHarris, Tony and Norma Pinto. He was predeceased by his mother, Anna, and father, John and his in-laws, Russell and Jane Corn. Visiting hours will be held on Fri, May 8 from 4-7pm at Kowalczyk Funeral Home 284 Main St., New York Mills. A memorial mass will be held on Sat. May 9 at 10:30am at the Church of Our Lady of The Rosary. Burrstone Rd., New Hartford Memorial Contributions in his name may be made to the Charity of one's choice. "Dad, when you left, you took a part of us with you. We will never forget you and will love you forever" Light a Candle at: wwwkowalczykfuneralhomes.com

Ron Wakeel, 69, of Boca Raton, Fla. and formerly of New Hartford met his maker on April 26, 2009 only months after the onset of an aggressive cancer. He died peacefully at home with his loving family and friends by his side. Born in Utica... View Obituary & Service Information

The family of Ronald J. Wakeel created this Life Tributes page to make it easy to share your memories.

Send flowers to the Wakeel family.