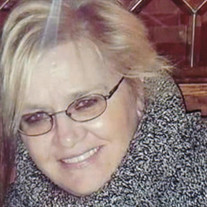 WHITESBORO – Roberta Lynn (Brown) Hunter, 62, passed away on December 24, 2020 at Faxton-St. Luke’s Healthcare with her loving daughters by her side. Roberta (Bobbi) was born on September 20, 1958, in Utica, the daughter of Robert and Caroline (Poplasky) Brown. She was a graduate of St. Francis de Sales High School and went on to receive an Associate’s Degree in Nursing. Roberta was a woman of compassion who believed nothing was more important than family. She learned this at an early age growing up on Lenox Avenue in a household of six children, with her grandparents, aunt and uncle living upstairs. Roberta was affectionately known as “Tiger” by her father Robert and she (his name sake) held a very special place in his heart. Roberta then grew an absolute love for tigers and decorated every room in the house with pictures of them. Roberta was very close to her siblings and later passed that trait down to her own children. Roberta’s dream was to be a mother and have a large family herself. She was a mother of four beautiful children whom she loved with her entire being, as well as her role as a “second mom” to all of her children’s friends especially the McBride Avenue crew, and “Zachie’s Boys”. Roberta was also a compassionate nurse for the elderly but sustained an injury on the job that left her disabled. The injury however gave her much time to spend with her children and grandchildren. Roberta can best be remembered as a charismatic person who was unapologetically herself, with a Pepsi in her hand, rocking in her beloved chair with the TV volume up way too loud, surrounded by people she loved. Most importantly, Roberta will be remembered for the love she had for her children and grandchildren. The “Fab 5 plus 1” will continue her legacy of family is everything and that their bond can never be broken. They will continue playing the card games she taught them, doing puzzles, and watching the shows she made them watch with her like, Grey’s Anatomy, Game of Thrones, and Station 19. Her two daughters will be sure to keep her legacy alive to love people for who they are and to laugh as loud and as often as you can! Surviving are her children, Jennifer (Jae) Constabile, Marcy and Catherine Ryczek, Whitesboro; mother, Caroline Francis; former son-in-law, Joseph Ryczek; six grandchildren, David Ryczek, Douglas Rando, Leah Ryczek, Frank Trotta II, Abree Ryczek and Sadie James Constabile; two brothers, Douglas Brown and Steven (Patricia) Brown, Utica; three sisters, Deborah (Charles) Newton, Sr., Edgewater, FL, Roxanne (Richard) Mirch, Long Eddy, NY and Laura (Filippo) Casamento, Frankfort; stepmother Joan Brown, Edgewater, FL, stepbrothers, Gerald (Tamara) Dziekowicz, Fredericksburg, VA, Paul Dziekowicz, Ft Worth, TX and Frederick Dziekowicz, New Hartford; her "other" grandchildren, Madison Davis and Tristan Lawson who she loved like her own; many aunts and uncles, especially Bernadette Brown; many nieces and nephews, close family member Carolyne Cesari, and her two best friends Robert and Danyelle Maddox of Durham, NC. Roberta was predeceased by two sons, Douglas Brown and Zachary Hunter; father, Robert and nephews, Charles Newton III, Enzo Casamento and Patrick Newton. Roberta had quite the welcoming party waiting for her when she arrived in Heaven. In keeping with the family’s wishes, funeral services will be private. Roberta’s family extends their sincere gratitude to the doctors, nurses and staff of Faxton-St.Luke’s Healthcare ICU for their care and compassion, especially Oksana Pilipchuk. Roberta’s family also wishes to recognize her niece, Gina Educate, for the love, support and guidance she provided during Roberta’s illness. Remembrances in Roberta’s memory may be made to the MVHS Covid-19 Response Fund at www.mvhealthsystem.org/donate, for the benefit of ICU staff. Arrangements are under the direction of McGrath, Myslinski, Karboski & Nunn Funeral Directors, 470 French Rd., Utica.

The family of Roberta (Brown) Hunter created this Life Tributes page to make it easy to share your memories.

Send flowers to the Hunter family.