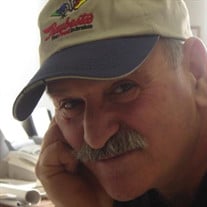 ROME – Robert B. Madonia, 74, passed away peacefully on Tuesday, July 6, 2021, at Faxton- St. Luke’s Healthcare, with his loving family by his side. Robert was born in Rome on January 23, 1947, the son of the late Andrew and Mary (Viscosi) Madonia. He was educated locally and after school joined the U.S Marine Corps. He was a Vietnam veteran and received a Purple Heart. He was a good man with a good heart whose life revolved around his family and his business. We will miss him so much. He will always be in our hearts. On September 9, 1967, Robert was joined in marriage to Charlotte Lucas at St. John the Evangelist Church in New Hartford, NY, a blessed union of 54 years. He was a businessman, having owned and operated Wheel Deal Motors in Rome, NY until his death. Robert is survived by his wife, Charlotte; son, Mark; grandchildren, Amanda (Stefano) Iodice and Alicia Madonia; brothers, Ronald (Tracy), Richard (Patti) and Jerry (Mary Kay) Madonia; sisters, Anita (Andy) Barber and Arlene Depan; special sister-in-law, Theresa Mazzatti; niece and nephew, Dana and Dino Madonia; nephew, Vinny Madonia and many cousins, nieces, nephews, in-laws and many dear friends. He was predeceased by his brothers, Tony, Andy, Angelo, Gabe, Vinny and Donald. In keeping with Robert’s wishes, there will be no public services. In lieu of flowers, remembrances in Robert's name may be made to St. Jude Children's Research Hospital at www.stjude.org Robert’s family thanks Dr. Scott Brehaut and the ICU nurses, Alex, Carrie and Maria for the care and compassion shown to him. Arrangements are under the direction of McGrath, Myslinski, Karboski & Nunn Funeral Directors, 470 French Rd., Utica.

The family of Robert B. Madonia created this Life Tributes page to make it easy to share your memories.

ROME – Robert B. Madonia, 74, passed away peacefully on Tuesday,...

Send flowers to the Madonia family.