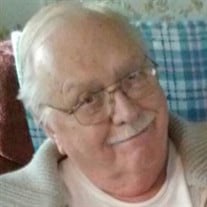 WHITESBORO - Richard “Dick” A. Williams went to be with the Lord on May 17, 2021. Dick was born in Utica, NY, and was the son of the late Edward A. and Mary Elizabeth (Birdseye) Williams. He grew up in Utica and attended local schools. Dick was in the U.S. Army from 1954 to 1963 and rose to the rank of SP5. In March of 1962, Dick married Susan Wheeler and they enjoyed a loving partnership of 59 years. Dick was a sheet metal worker and member of the Sheet Metal Workers, Local 58 for many years. In 1978, he began working for Fred F. Collis and Sons and retired from there in 1995 due to health problems. During his retirement, Dick spent many years working in his woodshop at his home on Mildred Ave. in Utica; where he enjoyed making gifts for family and friends. He and Susan enjoyed spending time in Lake George, NY. Recently, Dick and Susan moved to their current location in Whitesboro, NY. Dick leaves behind his beloved wife, Susan and their three children, Lisa Williams and her wife, Jodi Luvera, Charles Williams and his partner, MaryAnn Capocasale, and Richard and Cheryl Williams. In addition, he leaves behind five grandchildren, Michael, Elizabeth, Richard III, Julianna, and Ryan, as well as two great-grandchildren. Also left behind is his sister, Ruth Metzger of Illinois, and a sister-in-law, Patricia Bush of North Carolina. Dick also leaves behind several nieces and nephews. Dick was predeceased by his parents, grandparents, his long-time friend, Dean Wheeler, niece and nephew (Paula and Andy Metzger), brothers-in-law, Fred Metzger and Anthony Bush. In keeping with Richard’s wishes, services will be private for the family. Inurnment will be in Crown Hill Memorial Park. The family wishes to extend special thanks to the MVHS ICU staff at the St. Luke’s campus for the exceptional care he received. The ICU staff truly are angels. The family would also like to thank Jaime Blum, Nurse Practitioner at Upstate Family Health Center. Jaime went above and beyond in the care of Dick. In lieu of flowers, the family requests that donations be made to Upstate Family Health Center (www.upstatefamilyhealthcenter.org/donate) so that they may continue their mission to bring health care to all. Arrangements are under the direction of McGrath, Myslinski, Karboski & Nunn Funeral Directors, 470 French Rd., Utica.

WHITESBORO - Richard &#8220;Dick&#8221; A. Williams went to be with the Lord on May 17, 2021. Dick was born in Utica, NY, and was the son of the late Edward A. and Mary Elizabeth (Birdseye) Williams. He grew up in Utica and attended local... View Obituary & Service Information

The family of Richard "Dick" A. Williams created this Life Tributes page to make it easy to share your memories.

WHITESBORO - Richard “Dick” A. Williams went to be with the Lord...

Send flowers to the Williams family.