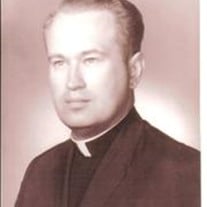 Rev. Richard J. Stuczko West Palm Beach, FL The Reverend Richard J. Stuczko, 81, was reunited with our Lord on July 19th 2010. He was born in Utica, NY on April 22, 1929, the son of John and Isabelle Zdanowicz Stuczko. Father Richard was educated in Utica Schools, including Thomas R. Proctor High, and then went on to attend Niagara University. His calling led him to study at Saint Andrew's Seminary and Saint Bernard's Seminary in Rochester, NY then SS. Cyril & Methodius Seminary of Orchard Lake, MI, before being ordained a Roman Catholic priest on June 5th 1954 at the Cathedral of the Immaculate Conception in Syracuse, NY. Father Richard considered Saint Stanislaus in Utica his home parish, but went on to serve the Lord in parishes throughout New York State including; St. Mary's (Rome), Transfiguration (Rome), St. Thomas Aquinas (Binghamton), St. Stanislaus, (Binghamton), Holy Trinity (Utica), Blessed Sacrament (Johnson City), Blessed Sacrament (Utica), St. Joseph (Oxford) and St. Stephen, (Oriskany). On June 5th 2004 Father Richard proudly celebrated fifty years in the priesthood. During his forty-year career he also worked as a Chaplin for the New York State Veteran's Home and the Oneida County Department of Corrections before his retirement in July of 1994. Although retired, Father Richard continued his service to our Lord in parishes in the Syracuse Diocese as well as Saint James Church, Lake Pleasant, NY. Father Richard Stuczko was a dedicated and faithful servant of God. "Uncle Richie" - as he was affectionately known to his family - was quick to share the Word of the Lord, a joke and his positive outlook on life with all who knew him. He was inspiring, generous and joyous and those who knew him will cherish his memory. The Reverend Stuczko is survived by three sisters and three brothers-in-law; Beatrice Grygiel of Naples, FL, Pauline and Paul Guzski of New Hartford, NY, Virginia and Donald Olienechak of Penfield, OH and Dr. Louis Soltys Sr. of Malta, NY as well as his maternal aunt, Helen Zdanowicz of Utica, NY, 17 nieces and nephews, many grandnieces and grandnephews and several cousins. He is predeceased by his parents and his sister Marianne Isabelle Stuczko Soltys. Services for Rev. Richard Stuczko are private and will be held at the convenience of the family. Funeral arrangements are under the care of the Kowalczyk Funeral Home, 1156 Lincoln Avenue, Utica, NY 13502 Light a Candle at: www.kowalczykfuneralhomes.com

The family of Rev. Richard J. Stuczko created this Life Tributes page to make it easy to share your memories.

Send flowers to the Stuczko family.