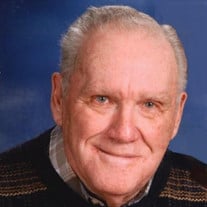 New Hartford - Richard “Richie” W. Fenton, 84, formerly of Forestport, peacefully passed into the arms of the Lord on October 12, 2021. Born in Utica, on December 10, 1936, Richie was the son of the late Cletus and Anna (Loftus) Fenton. He attended school locally, and thereafter joined the United States Air Force. He retired from the Utica Psychiatric Center. On November 11, 1960, he was joined in marriage to June M. Chambers, a union of 60 years. He was a volunteer firefighter for decades and a member of the American Legion and the 40/8. Richie was proud of his Irish heritage. He and June both loved animals and to the delight of their kids and grandkids, always had a house full. Richie is survived by his wife, June; children, Patricia “Angelica” (Doug) Pelow, Mary (Brian) Johnson, Daniel and fiancée, Stephanie Viscelli, Christine (Daniel) Lawrence; Grandchildren, Jessica (Ryan) O’Connell, Robert (Yasmin) Hartnett, Brian (Aislinn) Hartnett, Adam (Chelsea) Fenton, Marissa, Timothy, Joshua and Cassidy Fenton, and Sean Pelow. He leaves several great-grandchildren and nieces and nephews. He is pre-deceased by his beloved son, David W. Fenton; and siblings, Natalie Stell, Francis Fenton, and Cletus Fenton. The family wishes to extend their heartfelt gratitude to the dedicated staff of the Barton-East Unit at the St. Luke’s Home for their ongoing care and compassion, we appreciate all of you, with a special mention of Ashley Nichols who we lovingly refer to as our father’s “favorite daughter”. Relatives and friends are invited to attend a Mass of Christian Burial to be celebrated on Monday, October 18th at 11:00 a.m., at Mary, Mother of Our Savior Parish, Our Lady of Lourdes Campus, 2222 Genesee St., Utica. The family will receive guests following Mass. Interment will take place in St. Patrick’s Cemetery, Forestport. In lieu of flowers, remembrances in Richard’s name may be made to the American Autism Association. Envelopes will be available at the church. Arrangements are under the direction of the McGrath, Myslinski, Karboski & Nunn Funeral Directors, 470 French Rd., Utica. Messages of sympathy at www.mmknfd.com.

The family of Richard W. Fenton created this Life Tributes page to make it easy to share your memories.

Send flowers to the Fenton family.