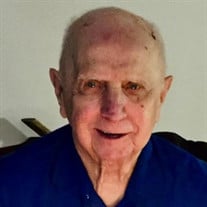 Richard C. Borawski, 87, passed away on Friday, January 21, 2022, at St. Peter’s Hospital, Albany. Born on February 18, 1934, in Utica, Richard was the son of the late Joseph and Antoinette (Mical) Borawski. He was educated in Utica schools, graduating from T.R. Proctor High School in 1951. Richard also attended the Utica School of Commerce. Richard was predeceased by the love of his life, his wife of 62 years, Josephine Lupia who passed away on August 26, 2018. He was a printer-proofreader at two area printing firms and the Observer-Dispatch. Richard was proud to have served two printing trade unions including several years as president of the Utica Typographical Local 62. He was a staunch believer in the labor union movement and for a time was editor and chief correspondent for a monthly union newspaper. Richard took great pleasure in his monthly O-D editorial letters over a several-year period. He also enjoyed serving as the librarian at the Parkway Senior Center for several years. Richard is survived by two daughters and their husbands, Susan and Paul Hayes, Latham, NY and Jody and Irving Kaplan, Dedham, MA; two grandsons, Paul Richard Hayes and Michael Hayes. He is also survived by two sisters-in-law, Maryrose Lupia, Utica and Paula Conrad, Montague, CA, along with several nieces and nephews. Richard was predeceased by a sister, Helen Szymanski and four brothers, Casimir, Matthew, Frederick and Walter and by his in-laws, Paul and Rose Lupia, who were like a second set of parents. Relatives and friends are invited and may call Sunday, January 30, 2022, from 11 a.m. to 1 p.m. at McGrath, Myslinski, Karboski & Nunn Funeral Directors, 470 French Rd., Utica. Funeral services will commence at 1 p.m. following visitation. Interment will be in Calvary Cemetery, Utica. Richard thanks his wonderful family and treasured friends for making life so worthwhile. His daughters extend their deepest appreciation to those dear cousins and special friends who brightened so many of Richard’s days. In lieu of flowers, remembrances in Richard’s name may be made to the Walter C. Borawski Scholarship Fund, Attn: ROTC, Thomas R. Proctor High School, 1203 Hilton Avenue, Utica, New York 13501. Envelopes will be available at the funeral home

The family of Richard C. Borawski created this Life Tributes page to make it easy to share your memories.

Send flowers to the Borawski family.