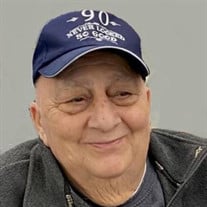 NEW HARTFORD – Richard S. Abounader, 91, passed away peacefully in his sleep, on February 22, 2021, at Faxton-St. Luke’s Healthcare. Richard was born on January 17, 1930, in Utica, the eldest son of Moses and Sadie (Nackley) Abounader. He was a graduate of Proctor High School and Richard proudly served his country in the U. S. Army after his graduation. On June 21, 1952, he was joined in marriage to Shirley Ann Tucker in St. Louis Gonzaga Church. Richard worked for H. R. Beebe Construction until his retirement in 1993. Richard was also a well-known local softball umpire for 63 years. He is survived by his beloved wife, Shirley; daughter and son-in-law, Regina and Gary Kostera; son and daughter-in-law, David and Sandy Abounader; grandchildren, Kaylee and Russell (Anderson), Jordan Kostera, Jamie Abounader, David Abounader II; and great-grandson, Dominick Abounader. He is also survived by his brothers Joseph, Fred, and Robert Abounader and their families. Richard’s children would like to extend much gratitude to his physicians, visiting nurses, friends and neighbors that have been there for him and them over the years. There will be no calling hours at Richard’s request but a memorial service will be held at a later date. Arrangements are under the direction of McGrath, Myslinski, Karboski & Nunn Funeral Directors, 470 French Rd., Utica

The family of Richard S. Abounader created this Life Tributes page to make it easy to share your memories.

Send flowers to the Abounader family.