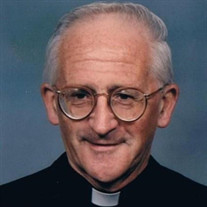 Windsor/Utica – Reverend Robert D. Dwyer, age 84, was called home on October 6, 2020, at UHS Wilson Medical Center. Born in Utica on March 13, 1936, he was the son of the late Michael and Mary (Marsden) Dwyer. He graduated from St. Francis de Sales High School, Utica, St. Bernard’s Seminary, Rochester and was ordained as a Catholic Priest on February 2, 1962. Later, he furthered his studies, having earned a Master’s Degree in Guidance from Syracuse University in 1971. Father Dwyer was appointed to several parishes and held numerous special assignments including Diocesan Commission for Ecumenism, NYS School for Deaf, Curia Legion of Mary, Rome Civil Defense, Rome Family Court, and Director of Permanent Diaconate during his more than 60 years of service in the Priesthood. He served parishes in Norwich, Rome, Florence, Oriskany Falls, Parish, Utica, Binghamton, East Syracuse, and Afton-Bainbridge. He was known as a loving and devoted chaplain; although retired and in his 80’s, he still said weekly Mass in three parishes, visited the sick, and officiated funerals. Father Dwyer’s ministry was nourished by a deep life of prayer and meditation. He was generous and gave away possessions and gifts because he felt there were others in greater need. Father Dwyer was grateful for the opportunities to have seen Pope John Paul II in Rome, Italy, and in New York. He was always very fulfilled with his calling in life. Father Dwyer marveled at nature and all of God’s creations. He was active all his life having been a mountain climber and a runner into his 70’s. Father Dwyer had great fun at the family camp on Oneida Lake, always wanting to be the first in the water each season. Known as the “fun uncle” in the family, he found great amusement riling up his nieces and nephews. He relaxed to classical music, enjoyed working in his garden, and had a passion for chocolate. Father Dwyer had a very inviting personality and greeted everyone with a welcoming smile. He is survived by his brother-in-law, John Kazlauskas, Durhamville, NY; several nieces and nephews, and his religious family at Transfiguration Monastery. He was predeceased by his sister, Anne Towne; brothers-in-law, Francis Hope and Robert Towne; brother, Reverend Michael Dwyer; and sister, Marybeth Kazlauskas. On Wednesday, October 14, Fr. Dwyer's body will be welcomed into Our Lady of Lourdes Church, 594 Kent St, Windsor, NY at 4:00 pm, where he will lie in state until 6:00 pm. A Vigil Mass of Jesus Christ the High Priest will be celebrated at 6:00 pm. Funeral services will be held in Utica, NY on Thursday at 11:00 am at the Church of Our Lady of Lourdes, where a Mass of Christian Burial will be celebrated. Visitation will be held prior to the Mass from 10-11 am. Interment will take place in St. Agnes Cemetery, Utica. In lieu of flowers, remembrances in Father Dwyer’s name may be made to the Catholic Campaign for Human Development. Envelopes will be available at the Mass.

The family of Rev. Robert D. Dwyer created this Life Tributes page to make it easy to share your memories.

Send flowers to the Dwyer family.