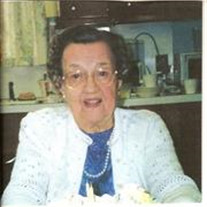 Type Obit Here Regina Zagraniczny Utica Regina Zagraniczny, 90, a lifelong Utica resident returned to the Lord on April 25, 2010 to be reunited with her husband, Joseph, whom she so dearly missed. Her family was by her side. Mom was born on January 13, 1920 to the late Stella Starczewski and Stanley Janiszewski. She attended local schools and married Joseph Zagraniczny on June 28, 1941, a joyful union until his death on July 5, 1964. She took pleasure in raising her family, especially the summer walks on Sunday to have supper with Dad and work at the railroad; at time she also worked outside the home. Mom loved her church and Polish heritage. She was a lifelong member of Holy Trinity Church, its Rosary Society and Sacred Heart Society, S. Catherine's Society and was one of the founding members of the Legion of Mary. She was active in the life of her parish. Mom is survived by her three sons; Stanley (Diana) of Westmoreland, Joseph (Linda) of Manlius and John (Patty) of Castleton; also two daughters, Reggie of New Hartford and Rosemary (Richard) Wroblewski of Mohawk. She took great pride and much joy in her grandchildren Danielle Wroblewski, David and Kate Zagraniczny, Abby Zagraniczny, Heather and Craig Johnson, Carrie and Michael Maiale and Jonathan and Abbey Menlius. She received great pleasure and joy in the activities and antics of her great grandchildren; Grace and Hayden Johnson and Jack Maiale. Also surviving is her brother Ed (Jean) Janiszewski of Colonie; her sisters-in-law, Mary Pawloski, Stella Romas, Helen (Joe) Handzel and brother-in-law Stanley Zagraniczny and many nieces, nephews, cousins and friends, especially the ladies of the Legion of Mary. She was pre-deceased by her brother Joseph Janiszewski and a sister, Mary Sulkowski. Funeral services will be held on Wednesday at 9:30am at the Kowalczyk Funeral Home 1156 Lincoln Avenue, Utica and at 10:00 at Holy Trinity Church where a Mass of Christian Burial will be celebrated. Burial will take place in Holy Trinity Cemetery. Relatives and friends may call on today from 4 until 7pm. Memorial contributions in her name may be made to the Masonic Care Community 2150 Bleecker Street Utica, NY 13501 or to Holy Trinity Church Memorial Fund 1206 Lincoln Avenue, Utica, NY 13502. Light a Candle at: www.kowalczykfuneralhomes.com

Type Obit Here Regina Zagraniczny Utica Regina Zagraniczny, 90, a lifelong Utica resident returned to the Lord on April 25, 2010 to be reunited with her husband, Joseph, whom she so dearly missed. Her family was by her side. Mom... View Obituary & Service Information

The family of Regina J. Zagraniczny created this Life Tributes page to make it easy to share your memories.

Send flowers to the Zagraniczny family.