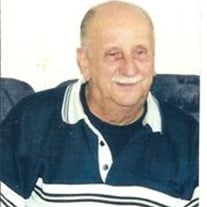 Raymond C. Hughes Sr. Utica Raymond C. Hughes Sr., 75, a longtime Utica resident died on Wednesday, February 10, 2010 at St. Elizabeth Medical Center with his loving family at his side. He was born in Stanford, CT on April 27, 1935 the son of Francis and Mabel Blake Hughes and came to the area as a child. On September 26, 1959 he was married to Faith McMahon in Utica. He enlisted and served proudly with the US Army during the Korean Conflict. Ray was employed with the Brennan / Utica Brake for 40 years until his retirement. Raymond Sr. served as the President of the Utica Overseas Veterans Association, and attended several local veteran's organizations. In his earlier years he was an avid bowler. Ray enjoyed the simple things in life good food, friends and family. He cherished ever moment spent with his family, especially when all four of his children gathered together. Ray always spoke what was on his mind; at times it would be difficult for him to express his emotions, although he had a deep respectful love for his sister Elizabeth, and his best friend Lia Le. He will always be remembered as a hard working, dependable man. His survivors include his loving wife Faith Hughes of Utica; two daughters and their spouses, Deborah and Joe Hamacher of Deerfield and Diane and J. Przybyla of Utica; two sons and their wives, Raymond and Diane Hughes of Schuyler and Brian and Ann Hughes of New Hartford; 11 grandchildren, Raymond III, Shawn, Monica, Heather Marie, Heather Anne, Karen, April, Julie, Kelsey, Dylan and Jacob and 8 great grandchildren; two brothers, Richard Hughes and Francis Hughes both of CT: and two sisters, Frances Williams of SC and Elizabeth LaFave of Utica. Also included are several nieces and nephews. He was predeceased by a sister Theresa Romano and a brother Donald Hughes. Funeral services will be held on Monday at 10:15 a.m. at the Kowalczyk Funeral Home, 1156 Lincoln Avenue, Utica and at 11 a.m. at St. Joseph - St. Patrick Church, 702 Columbia St. Utica, where a Mass of Christian Burial will be celebrated. Calling hours for Relatives and friends will be held on Sunday from 1 until 5 p.m. Burial with Military Honors will take place in Mt. Olivet Cemetery. Raymond's family would like to express their sincere gratitude to the Nurses and staff of the 3rd floor, and Intensive Care Unit at St. Elizabeth Medical Center for the care and compassion shown to Ray during his illness. In Ray's memory, Contributions may be made to the Disabled Veterans C/O the Overseas Veterans Post, 323 Genesee Street, Utica, NY 13501 Envelopes will be available at the funeral home. Light a Candle at: www.kowalczykfuneralhomes.com

The family of Raymond C. Hughes created this Life Tributes page to make it easy to share your memories.

Send flowers to the Hughes family.