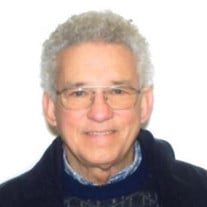 ONEIDA- Peter C. Vibbert Sr., 82, passed away peacefully on Thursday, December 3, 2020, at Sitrin Health Care Center. Peter was born on October 4, 1938, in Syracuse, to the late Riley and Amy (Wilson) Vibbert and graduated from Syracuse schools. On November 16, 1957, Peter married Sharen Owens in St. James Church in Syracuse. They enjoyed a blessed union of 53 years until her passing on April 23, 2011. He held various positions throughout this life but was predominately known as a daycare provider for New Concept Day Care in Oneida. Peter was a loving husband, father, and grandfather. He and his wife traveled all over the world. Peter was very generous to those in need, not just his family members. He made sure that everyone was taken care of. Peter is survived by his son, John C. Vibbert of Fort Meyers, FL, daughter and son-in-law, Kathy and Darryl Edgin of Whitesboro and son and daughter-in-law, Peter C. and Briedi Vibbert, Jr. of Oneida; 10 grandchildren, Justin, Ashley, Nicole, Jennifer, Kyle, Jared, Nicole, Rachel, Peter III and Joel, seven great-grandchildren, James, Cody, Bryce, Cooper, Aubrii, Fynlee and Spencer; brother, George (Joyce) Vibbert and several nieces and nephews. He was predeceased by his nephew, George Vibbert. Relatives and friends are invited and may call on Saturday, December 12th from 9:30-10:30 am at McGrath, Myslinski, Karboski & Nunn Funeral Directors, 470 French Rd, Utica. Funeral services will commence at 10:30 am from the funeral home and at 11:30 am at St. Paul’s Church, Whitesboro. In lieu of flowers, remembrances in Peter’s name can be made to the Alzheimer’s Association. Envelopes will be available at the funeral home. The Vibbert family would like to thank the nurses and staff at the Sitrin Health Care Center for the care and compassion shown during Peter’s stay. Messages of sympathy www.mmknfd.com

The family of Peter C. Vibbert Sr. created this Life Tributes page to make it easy to share your memories.

Send flowers to the Vibbert family.