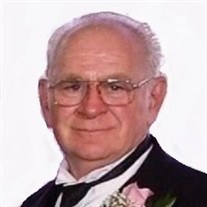 WHITESBORO – Peter R. Ferriter, 77, formerly a long-time resident of Remsen, passed away on September 21, 2021, at The Grand Rehabilitation and Nursing Center, Utica, after a long and courageous battle with kidney disease. Peter was born in Utica, NY, on June 9, 1944, the son of John R. and Margaret (Closson) Ferriter. He was raised in Utica and attended Utica Free Academy, after which he proudly served his country as a member of the United States Army. Peter was a talented machinist and over the course of his career, worked for General Electric, Chicago Pneumatic, and finally retiring from Crouse Hinds. He will be remembered by his family for all of the good-hearted teasing that was always followed up with the offer to give freely of his time, talent, or treasure. Peter is survived by Ruth (Sharon) Hazzard, or as he referred to her, “his one true love”; Sharon’s five children who Peter had the good fortune to love and raise as his own, Maryanne Robbins and Frank Gresiak, Cindy and Danny Millick, Charlene and Steven Cox, William and Karen Hazzard, IV, John and Karen Hazzard; 12 grandchildren, Don Robbins, “Purple” Misty (Aaron) Fuller, Amber (Gustavo) Rodriguez, Shannon (Brandon) Goodman, Amanda (Jimmy) Bray, Desiree (Curtis) Armstrong, William Hazzard, V, Joseph Hazzard, Matthew Hazzard, Jacob Hazzard, Michael Knoll, Jessica Knoll and 14 great-grandchildren, including Iris, who he shared a special bond with. He also leaves his two sisters, Mary Scully and Deborah and Sam Medici; sister-in-law, Suzanne Ferriter; brother-in-law, Tommy O’Donald and 9 nieces and nephews. Besides his parents, Peter was predeceased by his brother, John F. Ferriter, and brother-in-law, Robert E. Scully, Sr. “Those we love don’t go away; they walk beside us every day. Unseen, unheard but always near. Still loved, still missed, and very dear…” Relatives and friends are invited and may call on Friday from 4-6 p.m. at McGrath, Myslinski, Karboski & Nunn Funeral Directors, 470 French Rd., Utica. Funeral services will be Saturday at 10:30 a.m. at St. Peter’s Catholic Church, where a Mass of Christian Burial will be celebrated. Inurnment will be in St. Peter’s Cemetery at the convenience of the family. In keeping with the family’s wishes, masks will be required at both calling hours and the funeral. In lieu of flowers, please consider donations in honor of two of Peter’s great-grandchildren, to either Hope In Action, in support of pediatric cancer patients, PO Box 41, Vernon, NY 13476 or the Autism Society of the Greater Capital Region at www.asgcr.org/. Envelopes will also be available at the funeral home. Messages of sympathy at www.mmknfd.com

WHITESBORO &#8211; Peter R. Ferriter, 77, formerly a long-time resident of Remsen, passed away on September 21, 2021, at The Grand Rehabilitation and Nursing Center, Utica, after a long and courageous battle with kidney disease. Peter was born... View Obituary & Service Information

The family of Peter R. Ferriter created this Life Tributes page to make it easy to share your memories.

Send flowers to the Ferriter family.