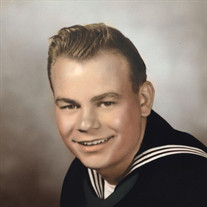 NEW HARTFORD - Michael J. Wojtanowski, 88, passed away peacefully on Monday, November 16, 2020 with his loving family by his side. Michael was born on February 20, 1932, in Utica, the son of the late Michael and Julia (Zagaja) Wojtanowski. He attended Holy Trinity and Utica Free Academy. Michael proudly served in the Korean Conflict aboard the destroyer, USS Coates DE685. On a blind date, he met the love of his life, Gladie Lombard. On July 27, 1957, they were married in Holy Trinity Church and shared a blessed union of 61 years prior to her passing on October 29, 2018. Michael was employed at General Electric for over 37 years. He was a loving husband, father and grandfather who always put his family first. Michael was very involved in Little League and Pop Warner. He loved fishing, splitting wood for the family fireplaces, handball, following all the children’s and grandchildren’s school and sport activities, where he was affectionately known as “Grandpa Woj”. He especially loved Christmas Eve and Notre Dame Fighting Irish Football. Michael was a lifetime member of the Knights of Columbus. He is survived by his children, Michael J., III and Lori Wojtanowski, Clinton, and Christine and Frank Buffa, Utica; grandchildren, Cori and Edward Jasewicz, Kimberly and Michael Strong, Erika and Ben Fusco, Frank Buffa, III, Michael and Kelly Buffa and Julia Buffa; great-grandchildren, Johnny Michael, Alyana, Maci, Joseph, Frankie, Reina, and Taylor as well as many nieces and nephews. Michael was predeceased by sisters, Sophie Wojtanowski and Jane (Eddie) Berecka; brothers, Walt (Stella) Wojtanowski and Stan (Wanda) Wojtanowski, and in-laws, Anna Mae (James) Farmer and Carol (Joe) Soldato. Relatives and friends are invited and may call on Thursday from 10 a.m. to 12 p.m. at McGrath, Myslinski, Karboski & Nunn Funeral Directors, 470 French Rd., Utica. Funeral services will commence at 12 p.m. at the funeral home and 1 p.m. at Holy Trinity Church where a Mass of Christian Burial will be celebrated. Interment will be in Holy Trinity Cemetery. Remembrances in Michael’s name may be made to the Holy Trinity Memorial Fund. Envelopes will be available at the funeral home. Michael’s family would like to thank Dr. William Ryan, Mary the dietician, and the Dialysis Unit at Faxton-St. Luke’s Healthcare for the care and compassion shown. “You Know What Grandpa Woj, Right-O!” To view Grandpa Woj's tribute video follow this link > https://www.tributeslides.com/tributes/show/BBZW39PKJFP74STS

NEW HARTFORD - Michael J. Wojtanowski, 88, passed away peacefully on Monday, November 16, 2020 with his loving family by his side. Michael was born on February 20, 1932, in Utica, the son of the late Michael and Julia (Zagaja) Wojtanowski.... View Obituary & Service Information

The family of Michael J. Wojtanowski created this Life Tributes page to make it easy to share your memories.

Send flowers to the Wojtanowski family.