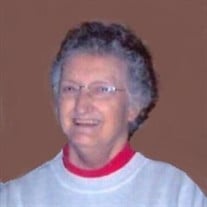 TOWNSEND, TN – Marilyn J. (Wilson) Barclay, 84, formerly of Utica, NY, and Clarkesville, GA, went home to be with her Lord on Saturday, February 6, 2021, in Maryville, TN. Marilyn was born on June 22, 1936, in Rome, NY, to Ernest and Agnes (Barber) Richardson of Verona, NY. She was a 1954 graduate of VVS Central School, Verona, NY, and a 1955 graduate of SUNY Morrisville. In 1961 she married William Steve Wilson, who preceded her in death on February 11, 2003. On December 18, 2004 Marilyn married John A. Barclay, Jr., who preceded her in death on February 15, 2018, after sharing 13 years of wonderful adventures traveling through our beautiful country. Marilyn worked as an LPN for over 35 years before retiring to Townsend, TN in 1997. She was a member of Bethel Baptist Church in Townsend. Marilyn was a part-time Dollywood employee for several years. She loved sharing her faith, being outdoors, and especially enjoyed flower gardening, camping, and picnics in the mountains, at the lake, or on the beach. Surviving to cherish her memory are her children, Julie (Tom) Anglin and Jennie Lynn, of Townsend, TN and Steven (Wendy) Wilson, Ilion, NY; grandchildren, Nicole and Andrea, Ilion; sister-in-law, Eleanor (Carl) Erickson, Wesley Chapel, FL; 5 nieces, 1 nephew, and their families. Marilyn was predeceased by her parents and two sisters, Thelma Gossner and Arlene Haynes. In keeping with the family’s wishes there will be no public visitation or funeral services. In lieu of flowers and in honor of Marilyn’s loving, compassionate heart and generosity, donations may be made to the charity of your choice. Arrangements are under the direction of McGrath, Myslinski, Karboski & Nunn Funeral Directors, 470 French Rd., Utica. Messages of sympathy at www.mmknfd.com

The family of Marilyn J. Barclay created this Life Tributes page to make it easy to share your memories.

Send flowers to the Barclay family.