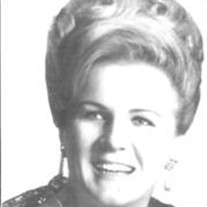 Maria Matyszczuk Utica Maria Matyszczuk, 73, of Utica, died on Tuesday, January 20, 2009 at her home after a long illness. She was born in Warsaw, Poland on August 3, 1935 the daughter of Stanislaw and Janina Sztern Dymek. She emigrated to Canada in 1950 and then came to the U.S. in 1980 when she married to Felix Matyszczuk at Holy Trinity Church, Utica. Maria was a member of Holy Trinity Church and sang with the Choir at the Church of Our Lady of Lourdes. She was a professional opera singer when living in Canada where she performed with the Toronto Opera for over 20 years. As a young girl she, her mother a brother and three sisters survived the occupation and uprising of Warsaw, Poland. They were then taken by the German Army and placed on a work farm until the American Army Liberation. She is survived by her husband Felix Matyszczuk of Utica; a daughter Dorata Maria and her husband Michael Laurence of Canada; three sons, Kaz and his wife Gail Koschuk, Robert Kosciuch and Edward and Joanne Kosciuch all of Canada; 2 sisters, Jolanta and Stanley Sleboda of MI and Krystyna and Alexander Dziewit of FL. Also included are her nine grandchildren and a great granddaughter. She was pre-deceased by her brother Stanley and a sister Janina. Relatives and friends are invited to attend a Mass of Christian Burial which will be celebrated on Saturday, January 24, 2009 at 9:30am at Holy Trinity Church. There are no calling hours. Burial will take place in Windsor, Canada. Maria's family would like to express their appreciation her dear friends and to the nurses and staff of Hospice & Palliative Care Inc. for the exceptional care and kindness she received. Memorial contributions in her name may be made to Hospice & Palliative Care Inc. 4277 Middle Settlement Road, New Hartford, NY 13413. Arrangements are under the care of the Kowalczyk Funeral Home 1156 Lincoln Avenue, Utica. Light a Candle at: www.kowalczykfuneralhomes.com

Maria Matyszczuk Utica Maria Matyszczuk, 73, of Utica, died on Tuesday, January 20, 2009 at her home after a long illness. She was born in Warsaw, Poland on August 3, 1935 the daughter of Stanislaw and Janina Sztern Dymek. She emigrated to... View Obituary & Service Information

The family of Maria Matyszczuk created this Life Tributes page to make it easy to share your memories.

Send flowers to the Matyszczuk family.