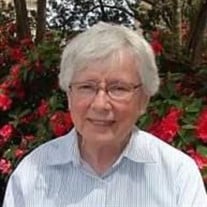 Utica, NY - Margaret E. (Mason) Jory, 93, passed away peacefully at home, with her loving family by her side on August 31, 2021. Margaret (Peggy) was born on September 15, 1927, (the second of two children born) to the late Thomas and Catherine (Morrissey) Mason. Peggy grew up in Ballston Spa, NY and was a graduate of Ballston Spa High School and Mildred Elley Secretarial School in Albany, NY. She worked for a number of years for General Electric in Schenectady and Utica and completed her career with the McCleary Sign Company. On June 27, 1953, Peggy married the love of her life, Donald P. Jory, in St. Mary’s Catholic Church in Ballston Spa. It was a blessed and happy marriage that was centered on the love of each other and family. Peggy was the devoted matriarch of her family and their needs were always her priority. She lovingly nurtured her children and grandchildren and was a dedicated caregiver to her mother and husband during their last years. Spending time with her family was what she most enjoyed in life. In later years she loved traveling to see family who had married and moved away. One of her most memorable traveling adventures was spent driving the Alcan (Alaskan-Canadian Highway) with her husband Don, camping along the way to see their first grandchild, Erin, in Fairbanks, Alaska. Other hobbies included skiing with Don and children at McCauley Mountain in Old Forge and also camping at Nick’s Lake in Old Forge. Peggy was a devout Catholic and was an active member of Our Lady of Lourdes Church since 1953 where she served as president of the Legion of Mary, was a member of the Eucharistic Adoration, St. Padre Pio Prayer Group, and Enthronement of the Sacred Heart. She and her husband, Don, were leaders in the Pro-Life movement. Peggy’s faith and trust in the power of prayer helped her family in both good times and challenging times. Peggy is survived by four children and their spouses; Kathleen Byrnes (Thomas), Maureen Cronauer (Alan), Thomas Jory (Cheryl), and John Jory; daughter in law, Karen Bucek; eight grandchildren, Erin Cantrell (Jeremiah), Christopher Byrnes (Liz Heffron), Carolyn, Stephen, and Matthew Cronauer, Brittney Jory, Seth Jory (Samantha), and Austin Jory; five great-grandchildren, Mason, Liam, and Dawson Cantrell, Elliott Jory, and Kai Byrnes; nieces, Jeanette Evans, Mary Crehan, Margaret LaBuz, Ann Joseph, Judy Jones, and Debbie Grabowski; nephews, Bernard Jory, Philip Jory, Edward Jory, Paul Jory, James Jory, and Michael Jory. Peggy was predeceased by her beloved husband, Donald in 2006 and by her devoted son, Daniel in 2018. She is also predeceased by her sister and brother-in-law, Mary and Stanley Grabowski; in-laws, Oscar and Grace Jory, Arthur and Mildred Jory, Francis and Dorothy Jory, and niece, Carol Ann Edmondson. Relatives and friends are invited and may call Saturday from 9 to 10 a.m. at McGrath, Myslinski, Karboski & Nunn Funeral Directors, 470 French Rd., Utica. Funeral services will commence at 10 a.m. from the funeral home and 11 a.m. at the Church of Our Lady of Lourdes, where a Mass of Christian Burial will be celebrated. Interment will be in St. Peter’s Cemetery, Saratoga Springs. The family would like to gratefully acknowledge Dr. Bhisham Garg and Hospice for the kind and compassionate care they provided our mother. We would like to especially thank Peg’s neighbors, Denise and Maria, and caregivers, Sheila, Donna, and Nancy for being such a special part of our mother’s life. In lieu of flowers, remembrances in Peggy’s name may be made to the Church of Our Lady of Lourdes Memorial Fund. Envelopes will be available at the funeral home.

Utica, NY - Margaret E. (Mason) Jory, 93, passed away peacefully at home, with her loving family by her side on August 31, 2021. Margaret (Peggy) was born on September 15, 1927, (the second of two children born) to the late Thomas and Catherine... View Obituary & Service Information

The family of Margaret E. (Mason) Jory created this Life Tributes page to make it easy to share your memories.

Send flowers to the Jory family.