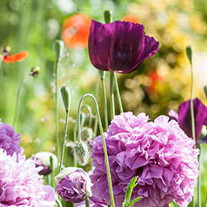 Linda Duane Brownell Marsh, age 64, of Sauquoit, passed away at home on Friday, December 12 after a year-long battle with pancreatic cancer. Linda was born in Amsterdam, NY, on June 25, 1944 to the late Leonard Dempster Brownell, Jr. and Margaret Kearns Brownell. She grew up in Broadalbin, NY, and was a graduate of Perth Central School and Ohio State University. In her early years, Linda spent time living in Panama, Mexico, and Germany, where she gained a great appreciation for people, culture, and travel. When she returned to the Mohawk Valley, Linda began a successful career in tourism. She became the first Executive Director of Leatherstocking Country in 1975. In 1982, Linda married George T. Marsh and worked side-by-side with him cultivating the growth and success of the Marsh family business: the Utica Rome Bus Company. Linda was instrumental in helping the company to deserve its slogan: "We're Something Special." After selling the company in 1992, Linda and George retired but never slowed down. She was a leader in numerous organizations, including the Daughters of the American Revolution, Kiwanis Club of Clinton, and the Clinton Garden Club. Linda earned the admiration and respect of many in the Adirondack community when she served as a coordinator, treasurer, and board member of St. William's on Long Point in Raquette Lake, where she and George have enjoyed much of their retirement. Linda lived an exemplary life of hard work, community involvement, and service to others. Linda will be remembered for her love of life, family, and friends. She had a special way of making everyone she encountered feel good. Linda was known to strike up a conversation with anyone: the bagger at the grocery store, the lift-line attendant, or the NYC cab driver. Linda lived life to the fullest, gaining great joy from its simple pleasures. Nature, animals, children, music, history, swimming, hiking, cooking, gardening and entertaining were just some of her many hobbies and interests. Most of Linda's time was spent nurturing her countless friendships and relationships. She was always thinking of others, picking out just the right gift, wrapping it in just the right ribbon, and sending cards, letters, and thank-you notes for every occasion. Linda touched many lives and her presence will be deeply missed. Linda is survived by her beloved husband, George, of Sauquoit, her step-daughter, Rebecca Marsh, of South Burlington, Vermont, her step-daughter, son-in-law, and granddaughter, Sue Marsh, Kevin Frawley and Maya Ann Frawley, of New Hartford, her sister and niece, Susan Brownell and Jennifer Keller of Johnstown, two sister-in-laws, Janet Cackett of Clinton and Nancy Roberts of Hamilton, and several cousins. Linda's family would like to express sincere appreciation for the kindness and compassion displayed by the many caregivers at Bassett Hospital, Faxton-St. Lukes Regional Cancer Center, Massachusetts General Hospital, and Hospice. George and Rebecca are also extremely grateful for the visits, cards, love and support of all of their dear friends and family. In lieu of flowers, contributions may be made to St. William's of Long Point, PO Box 71, Raquette Lake, NY, 13436, or Dr. Fernandez Del Castillo, Pancreatic Cancer Research, MGH, Wang Ambulatory Care Center 460, 15 Parkman Street, Boston, MA, 02114. Relatives and friends are invited to attend a Memorial Mass for Linda which will be celebrated on Wednesday at 10am at St. Mary's Catholic Church, Clinton. Visiting hours will be held on Tuesday from 5 until 8pm at the Owens - Pavlot Funeral Service 35 College Street, Clinton. Arrangements are under the care of the Kowalczyk Funeral Homes, Utica / New York Mills. Light a Candle at: www.kowalczykfuneralhomes.com

Linda Duane Brownell Marsh, age 64, of Sauquoit, passed away at home on Friday, December 12 after a year-long battle with pancreatic cancer. Linda was born in Amsterdam, NY, on June 25, 1944 to the late Leonard Dempster Brownell, Jr. and Margaret... View Obituary & Service Information

The family of Linda B. Marsh created this Life Tributes page to make it easy to share your memories.

Send flowers to the Marsh family.