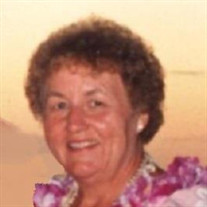 NEW HARTFORD – Lillian K. Synakowski, 87, passed away peacefully on Wednesday, April 28, 2021 at MVHS Rehabilitation and Nursing Center. Lillian was born on February 12, 1934, in New Hartford, the daughter of the late Thomas and Katherine (Huta) Kroll. She was a 1952 graduate of New Hartford High School. On September 15, 1956, Lillian married Richard A. Synakowski in St. John the Evangelist Church. They shared a blessed union of almost 60 years prior to his passing on April 9, 2016. She was employed as a statistic analyst for over 35 years at Utica National. Lillian was a loving wife, mother and sister. She enjoyed spending many summers at the family camp at Piseco Lake. Lillian was a member of the Red Hat Society for many years. She was an avid golf fan and would never pass up a good Hallmark movie. Lillian is survived by two daughters, Kathryn Synakowski, NY, and Karen Sharpe, NY; two sons and a daughter-in-law, Richard Synakowski, NY, and Gary and Kathleen Synakowski, NJ; sister-in-law Dorothy Synakowski as well as numerous nieces and nephews, longtime friend, Helen Hadynski and special friends Judy and Nicole. She was predeceased by her siblings. Relatives and friends are invited to attend a Mass of Christian Burial to be celebrated on Monday at 11 a.m. at St. John the Evangelist Church, New Hartford. Private visitation will be held prior from 9 to 10 a.m. at Kowalczyk Funeral Home, 470 French Rd, Utica. Interment will be in St. Stanislaus & Casimir Cemetery, Whitesboro. In lieu of flowers, remembrances in Lillian’s name may be made to Edwards Ambulance, Inc. Envelopes will be available at the Mass. Lillian’s family would like to thank the nurses and staff of Clark North at MVHS Rehabilitation and Nursing Center for the care and compassion shown. Arrangements are under the direction of Kowalczyk Funeral Home, 470 French Rd., Utica.

The family of Lillian K. Synakowski created this Life Tributes page to make it easy to share your memories.

Send flowers to the Synakowski family.