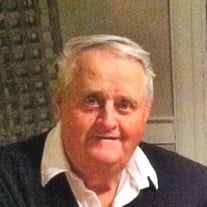 WATERVILLE – Leo W. Mosakowski, 88, passed away unexpectedly after a brief illness on Monday, October 11, 2021, at St Elizabeth Medical Center. Born on September 30, 1933, in Utica, he is the son of Leon and Florence (Czyupryna) Mosakowski. Duke was a graduate of New Hartford High School. He was a U.S. Army veteran. On October 8, 1961, Duke married Doris Plourde at Polish National Catholic Church. They enjoyed 52 years together until her passing on May 30, 2014. For over 50 years, Duke owned and operated Props Inn, in New Hartford where he enjoyed the sociability and spending time with his patrons. Duke was an avid scratch golfer. His other interests included fishing and hunting with his buddies, Charlie Roberts and Tom Goton. He enjoyed taking annual big game trips to Wyoming with his friends and family. Duke was a generous and kind man who took care of many people and contributed to numerous charitable organizations. Surviving are his children, Jacqueline Mosakowski, Jill (Dennis) Roberts, Gary (Annalyn) Mosakowski and Duke Mosakowski (Thaddeus Chase); grandchildren, Wesley (Meghan) Roberts, Krista (Michael) Broadway, Molly (Alex) DiPaola and Jenna Mosakowski; and great-grandchild, Ruth Ann Roberts who was his pride and joy of this past year; sister, Leona Ward; in-laws, Norman (Pansy) Plourde, Richard (Kathy) Plourde, Helen Ploude, Barbara Daly and John and Linda Beasman and many nieces and nephews. Relatives and friends are invited and may call Friday from 3 to 5 p.m. at McGrath, Myslinski, Karboski & Nunn Funeral Directors, 470 French Rd., Utica. Funeral services will commence following visitation at 5 p.m. Inurnment will be in Polish National Cemetery at the convenience of the family. In lieu of flowers, remembrances in Duke’s name may be made to the Cystic Fibrosis Foundation (www.cff.org). Envelopes will be available at the funeral home.

WATERVILLE &#8211; Leo W. Mosakowski, 88, passed away unexpectedly after a brief illness on Monday, October 11, 2021, at St Elizabeth Medical Center. Born on September 30, 1933, in Utica, he is the son of Leon and Florence (Czyupryna) Mosakowski.... View Obituary & Service Information

The family of Leo "Duke" Mosakowski created this Life Tributes page to make it easy to share your memories.

Send flowers to the Mosakowski family.