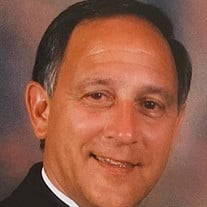 Lance Stuart Winnicki, age 74 of New Hartford, died at St Elizabeth Medical Center on February 23, 2022, after a three-year battle with a vicious form of Parkinson's disease. Lance was born in Utica, the son of Edward and Lillian Winnicki. He graduated from Notre Dame High School in 1965 and from Boston College in 1969. That same year, he entered the US Navy, serving four years in the Vietnam War on the USS Niagara Falls, earning the Navy Achievement Medal for effectiveness in combat operations. In 1974, Lance married Maryann Keida and began a spirited and love-filled life with her. After leaving the Navy, Lance joined his father at the Winnicki Insurance Agency, purchasing the business in 1980. He obtained his CPCU and CIC insurance designations and taught numerous insurance licensing classes. He was a true leader of the industry and loved the world of business. He also served in many professional and community service organizations. He sold his agency in 2000 and continued his insurance career at Utica First Insurance Co. retiring in 2014. His next career began when he joined his wife in her travel business. He especially loved their long weekends in Paris, flying first class on Air France. He and Maryann led many groups to all parts of the globe. One of his biggest thrills was playing golf at the Old Course in St. Andrews, Scotland. He developed his love of golf while working on his family's golf course during high school and college. He was a 3-time club champion at the Skenandoa Club before joining the Yahnundasis Golf Club, winning four club championships there during his 38 years as a member. Lance could talk to anyone. He was interested in the people he met and was generous with his time. He was a voracious reader, a lover of crossword puzzles and of good food, having been spoiled by his wife's amazing cooking. He was a kind and honorable man and he will be genuinely missed. He leaves to mourn him, his devoted wife of 47 years, Maryann; his sisters, Christine Hall of Whitesboro and Michelle and Bohdan Herbowy of New Hartford; his brother-in-law and sister-in-law, Richard and Jeannette Keida of Las Vegas; nieces, Eve and Kurt Dean of Arizona, Justine and Roman Sanchez of Colorado, Diedre and Michel Ayers of New Jersey, Katie Hall (Brian Scharbach) of Yorkville; nephews, Jason and Brenda Hall of Missouri, Adam and Laura Hall of Rhode Island, Maksym Herbowy of Utica and Luc Herbowy of New York City. He leaves behind his many dear golfing friends, noting Lou Rabice, Steve Critelli, Bob Walser, and Ron Wargo. He was preceded in death by his sister, Linell and brother-in-law, Dick Hall. Lance's family thanks the doctors, nurses, and staff of St Elizabeth’s ICU for their outstanding care and compassion shown to Lance. Maryann also extends her deepest gratitude to Missy Grant's team whose excellent care allowed Lance to be comfortable and happy in his own home for the past six months. Relatives and friends are invited to attend a Celebration of Life on Wednesday, May 18, 2022, at 11:00 A.M. at Mary, Mother of Our Savior Parish, Our Lady of Lourdes Campus. Remembrances in Lance's name may be made to the University of Rochester's Parkinson's Disease Research, Office of Medical Center Advancement, Attention: James O'Brien, Box 278996, PO Box 23029, Rochester, NY 14692-9804 or online at www.giveto.urmc.edu/PDResearch. Envelopes will also be available at the Mass.

Lance Stuart Winnicki, age 74 of New Hartford, died at St Elizabeth Medical Center on February 23, 2022, after a three-year battle with a vicious form of Parkinson's disease. Lance was born in Utica, the son of Edward and Lillian Winnicki.... View Obituary & Service Information

The family of Lance Stuart Winnicki created this Life Tributes page to make it easy to share your memories.

Send flowers to the Winnicki family.