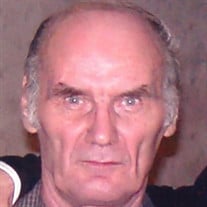 UTICA – Kenneth G. Grems, 78, passed away on Saturday, May 29, 2021, at Faxton St. Luke’s Healthcare with his loving family at his side. Ken was born on June 4, 1942, in Rome, the son of Ralph and Mary Reba (Griffiths) Grems, Sr. He was a graduate of Holland Patent High School and then entered the military serving with the U.S. Air Force for four years. On June 30, 1973, Ken married Beverly J. Handzel of Utica. He was employed with Pettibone of Rome until its closing and then went to work for UAP Engine Rebuilders from where he retired. Family was most important to Ken and time spent with his granddaughter, Cameron, was precious to him. Ken enjoyed bowling and was league secretary of the “Friday Night Unknowns” for many years. He also delivered newspapers for over 20 years, a career that started because he didn’t want his kids to get up so early to deliver them. Ken loved chatting with the folks he met on his route. Surviving besides his wife of 48 years, Beverly he leaves three sons and a daughter-in-law, Christopher and Nicole Grems, Westmoreland, Corey Grems, Whitesboro and Todd Grems, Clinton and beloved granddaughter, Cameron. He is also survived by his brothers and sisters-in-law, Robert and Bertha Grems, Floyd, Keith and Donna Grems, Floyd, Roger and Ann Grems, Lee Center, Wayne and Carol Grems, Rochester, Dale and Sharon Grems, Holland Patent, June Almond, Utica, Mary Rita Grems, Floyd, Diane and Albert Hale, Vermont, Wayne Nervik, Pennsylvania, Mark and Dianne Handzel, Chenango, Harley Handzel, Utica, Nancy Keville, Canastota and several nieces and nephews. Ken was predeceased by his brother, Ralph Grems, Jr.; sister and brother-in-law, Jean and Herman Schwertfeger, Floyd; sister, Carolyn Thrasher, Utica and brother-in-law, Albert Almond. Relatives and friends are invited and may call Thursday from 4 – 6 p.m. at McGrath, Myslinski, Karboski & Nunn Funeral Directors, 470 French Rd., Utica. Funeral services will commence following visitation at 6 p.m. with Sister Maureen Denn, CSJ officiating. Graveside services will be Friday at 3 p.m. at Townsend Cemetery, Floyd. In lieu of flowers, remembrances in Ken’s name may be made to the American Cancer Society at www.cancer.org. Envelopes will be available at the funeral home.

The family of Kenneth "Ken" G. Grems created this Life Tributes page to make it easy to share your memories.

Send flowers to the Grems family.