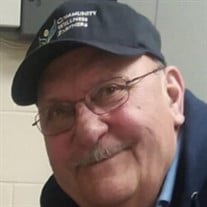 Kenneth Alan Wittman, 78, of New Hartford, NY, passed away suddenly on December 28, 2021, at St. Elizabeth Medical Center surrounded by his loving family. Ken was born in New Hartford on August 27, 1943, the son of Clarence and Esther Wittman. After graduating from New Hartford High School he began work at Mohawk Containers, before transitioning to Broadway Brake Shop, where he worked alongside his father for several years. On September 14, 1963, Ken married Joan Marsh and they began their lives together. While he loved working with his father, Ken eventually started his own business, and besides his family, Ken Wittman Sanitation soon became his pride and joy. After retirement, Ken continued to work driving the resident bus for The Presbyterian Home. Having a witty sense of humor isn’t the only thing Ken will be remembered for. His helping hand for anyone in need, his care for others, and his incredible need to stay busy are attributes that will be sorely missed within the family, and amongst those who knew him. Some would say his love for tinkering and fixing things is what made Ken who he was, but his love for his wife of 58 years, Joan, was what kept him so jovial. Since the age of 16, one of Ken’s greatest loves was drumming. The Camden Continentals Fife and Drum Corps was a pastime he enjoyed with his father, and brother, Ron. He was a member of the corps for over 60 years. His love for drumming also provided him the amazing opportunity to meet the love of his life, Joan. The corps wasn’t the only thing that filled up Ken’s time, however. Anyone who knew “Papa,” knew he had a fascination with vintage automobiles, and would often buy or sell cars to take “Mamma” out for rides in. And to say Ken valued being a member of the Elks Lodge #33 would be an understatement. Ken received the honor of being named Elk of the Year, which is an accomplishment that brought him great joy. Ken is survived by his beloved spouse, Joan (Marsh) Wittman; son, Christopher (Cristal) Wittman, of Suttons Bay, Michigan; daughters, Suzanne (Dave) Spado of Westmoreland, Rebecca Wittman and Mark Benoit of Munnsville. He also leaves to cherish his memory his grandchildren, David Spado (Erica), Brandi Duell (Tyler), Tiffany Spado, Nicole Wittman, and Michael Wittman. Also surviving are his siblings, Nancy Wittman and Gail Streit; sister-in-law, Jo-Ann Wittman; brothers and sisters-in-law, Robert (Deborah), Edward (Gail) Marsh as well as many nieces, nephews, and cousins. He was predeceased by his parents and siblings, James (Betty) Wittman, Helen (Corb) Tillman, Peg (Bob) Betler, Ron Wittman, Judy (Larry) Evenson, Gary Wittman, and brother-in-law, Dick Streit. Visitation for family and friends will be held Monday, January 3rd, from 4-6 p.m. at McGrath, Myslinski, Karboski & Nunn Funeral Directors, 470 French Rd. Ken’s family will stay until all guests are seen. B.P.O.E Lodge #33 will hold their prayer service at 5:45 pm. A Mass of Christian burial will be celebrated on Tuesday, January 4th, at 10:30 a.m. at St. John the Evangelist Church, New Hartford. Following the celebration of life, Ken will be laid to rest at Crown Hill Memorial Park. In lieu of flowers, donations can be directed to Camden Continentals or Utica Elks Lodge #33. Envelopes will be available at the funeral home.

The family of Ken Wittman created this Life Tributes page to make it easy to share your memories.

Send flowers to the Wittman family.