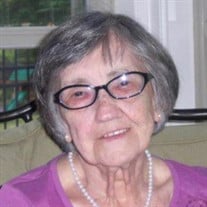 UTICA – June Hillman Castelletti, 95, left to fly with the angels on October 28, 2020. She was born in Sauquoit, NY on June 17, 1925, daughter to the late George B. and Mabel A. (Messenger) Hillman. She was raised and educated in Utica. On January 21, 1950, she was united in marriage to Walter G. Castelletti, a blessed union until his death on November 28, 1987. June’s chosen path was as a wife and mother to her five children. She loved to cook and bake, a love which she passed down to her girls. June was an excellent seamstress who enjoyed sewing for her family and friends. She also enjoyed her longstanding bridge group. She was fabulous at all of these things. Nothing made her happier than to have her home filled with family. Her quick wit and beautiful smile will be remembered and missed by all who were lucky enough to know and love her. June had an especially close relationship with her grandson, Ryan Castelletti, whom she adored. They were so blessed to have the opportunity to spend so much time together. June is survived by her five children, Patricia J. (Charles) McGee, Camillus, Walter R. (Charlene) Castelletti, Whitesboro, Marybeth A. Castelletti, Utica, F. Carl (Jean) Castelletti, Sauquoit and Nancy A. Castelletti, Camillus; grandchildren, Meghan, Michael (Andrea), and Ryan (Jaclyn) McGee, Marc and James Castelletti, Ryan Castelletti, CJ, Caitlin and Andrew Castelletti; as well as her great-grandchildren, Ryann Elise, Peyton June, Logan Michael, Emerson Jane, Owen Charles and Clara Christine McGee; sisters, Ruth Hill, Vestal and Jeanette Scott, FL, and many nieces and nephews. In addition to her husband, June was predeceased by siblings, Gertrude Mara, Burton Hillman, Robert Hillman, Kenneth Hillman and Nancy Perkins. There are no public calling hours. A Mass of Christian Burial will be held Tuesday, November 10 at 11 a.m. at The Church of Our Lady of Lourdes, Utica. In lieu of flowers, remembrances in June’s name may be made to The Arc Oneida-Lewis Chapter at www.thearcolc.org/donations-foundation. Envelopes will also be available at the Mass. Arrangements are under the direction of McGrath, Myslinski, Karboski & Nunn Funeral Directors, 470 French Road, Utica.

The family of June H. Castelletti created this Life Tributes page to make it easy to share your memories.

UTICA – June Hillman Castelletti, 95, left to fly with the angels...

Send flowers to the Castelletti family.