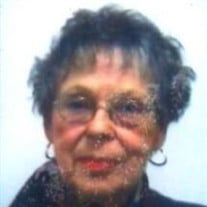 NORTH UTICA – Joyce Bova, 81, passed away on Saturday, May 29, 2021, in the comfort of her own home surrounded by her loving family. Joyce was born on October 18, 1939, in Utica, the daughter of Malcolm and Emelia (Caccia) Doyle. She was a graduate of UCA. On December 20, 1958, Joyce married Richard F. Bova. They enjoyed 57 years together prior to his death on September 3, 2016. She was a healthcare claims representative for the Utica School Board. Joyce was a member of Ladies with Attitude, The Red Hat Society, and the Uarda Temple Daughters of the Nile for 13 years, serving as an officer for the last 8. She was a member of Uarda Patrol. Joyce was also a member of the Utica-Holly Chapter of the Order of the Eastern Star for 16 years where she had served as a Matron. She was also past Associate Grand Warder of N. Y. Eastern Star. Joyce is survived by brothers-in-law and sisters-in-law, Lawrence and Marie Bova, Dennis and Sandra Bova, and Bonnie Bova, and several nieces, nephews and grand-nieces and grand-nephews. She was predeceased by her goddaughter, Krista Bova; sister, Patricia Doyle and brother-in-law, Donald Bova. Relatives and friends are invited to a Mass of Christian Burial to be celebrated on Friday at 11:30 a.m. at St. Mark’s Catholic Church, North Utica. The family will receive guests following the Mass. Interment will be in Mt. Olivet Cemetery, Whitesboro. In lieu of flowers, remembrances in Joyce’s name may be made to the Eastern Star. Envelopes will be available at the Mass. Arrangements are under the direction of McGrath, Myslinski, Karboski & Nunn Funeral Directors, 470 French Rd., Utica.

The family of Joyce Bova created this Life Tributes page to make it easy to share your memories.

Send flowers to the Bova family.