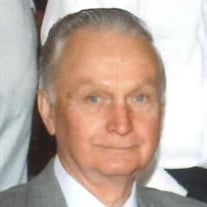 WHITESBORO – Joseph “Joe” S. Tarkowski, Sr. who celebrated his 95th birthday this year, passed away on Sunday, June 27, 2021, in the comfort of his home, with his family by his side. Joe was born on March 20, 1926, in Clinton, NY, the son of the late Patrick and Julia (Zaleski) Tarkowski. He attended UFA and was drafted into the Army where he proudly served his country from 1944-1946 in the 13th Airborne Glider Infantry. On June 7, 1951, Joe married Mae Pickett, the love of his life, in Holy Trinity Church. They shared a loving and blessed union of over 55 years before her passing on May 31, 2007. Joe was a Product Manager, working his entire career with Kelsey Hayes, later known as Utica Corp. Joe was a member of the Whitestown Optimist Club and the New Hartford American Legion Post 1376 for many years. He enjoyed fishing and hunting throughout his life. Joe was a loving husband, father, grandfather and great-grandfather, affectionately known as, “Grandpa Tarky”. Surviving Joe are his two sons, Joseph Tarkowski and Paul (Jolene) Tarkowski, Whitesboro; grandchildren, Christopher (Maggie) Tarkowski, Brittany (Andrew) Starczewski, and Patrick (Marianna) Tarkowski; great-grandchildren, Lucas, Wyatt, Auston, Stella, and Harper Mae "on the way". He also leaves a sister, Dorothy Synakowski, numerous nieces, nephews, and so many longtime cherished friends. Joe was predeceased by his siblings, Mary (John) Jasinski, Bernard (Sophie) Tarkowski, Bernice (Eugene) Kuklinski, Felix (Nora) Tarkowski, Clara (Alex) Szymanski, Irene (John) Czerniawski, Eleanor (Floyd) Babrowicz King, Geraldine (Paul) Buchowski and his infant sister, Helen; father-in-law and mother-in-law, Charles and Gladys (Dumka) Pickett. Relatives and friends are invited and may call on Wednesday from 4-6 p.m. at Kowalczyk Funeral Home, 470 French Rd., Utica. Funeral services will be Thursday at 10:00 a.m. at Holy Trinity Catholic Church, 1206 Lincoln Ave., Utica, where a Mass of Christian Burial will be celebrated. Interment will be in Holy Trinity Cemetery with Military Honors conferred. In lieu of flowers, remembrances in Joe’s name may be made to Holy Trinity Memorial Fund or to the Whitestown Optimist Club. Envelopes will be available at the funeral home.

The family of Joseph "Joe" S. Tarkowski Sr. created this Life Tributes page to make it easy to share your memories.

Send flowers to the Tarkowski family.