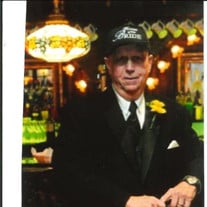 YORKVILLE – Joseph “Joe” M. Chiarello, 78, passed away peacefully on Tuesday, June 8, 2021, at home with his family by his side. Joe was born on October 31, 1942, in Utica, the son of Joseph A. and Rose Louise (Greco) Chiarello. He attended Proctor High School. Joe proudly served his country in the U. S. Army from 1960-1963. On July 23, 1966, he married Evelyn Hartman in the Church of Our Lady of the Rosary. He was a Principal Welfare Examiner for Oneida County Department of Social Services until his retirement in 2005. Joe was a loving husband, dad and papa. He enjoyed cooking family meals, fishing at the St. Lawrence River and trying his luck at the casinos. Joe is survived by his beloved wife, Evelyn; two children and their spouses, JoAnn and Scott Bennett, New York Mills, and Gina and Michael Fitzsimmons, Whitesboro; sister and brother-in-law, Angela and Dennis Manning; sister-in-law Marilyn Chiarello; grandchildren, Christopher Bassett (Ashley Fuller), Alyssa Bassett, Troy Chamberlain, Tyler Bassett, and Easton Fitzsimmons; great-grandchildren, Cambriah and Robert, along with several nieces, nephews, and extended family and special friends throughout his life. He was predeceased by his brother, Peter Chiarello. Funeral services will be on Friday at 11 a.m. at the Church of Our Lady of the Rosary. The family will receive guests following the Mass. In lieu of flowers, remembrances in Joe’s name may be made to Hospice & Palliative Care Inc. in gratitude for the compassionate care they provided to Joe during his illness. Envelopes will be available at the Mass. Online donations at www.hospicecareinc.org/donate Joe’s family would like to thank Hospice & Palliative Care, Inc. for the care and compassion shown to him. Arrangements are under the direction of McGrath, Myslinski, Karboski & Nunn Funeral Directors, 470 French Rd., Utica.

The family of Joseph "Joe" M. Chiarello created this Life Tributes page to make it easy to share your memories.

Send flowers to the Chiarello family.