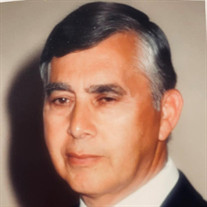 Jose Martinez, 79, went home with the Lord on January 16th, 2022 with his loving family by his side in the comfort of his home. Jose was born March 22nd, 1942 in Adjuntas, Puerto Rico to Gloria Torres and Jose Martinez, Sr. As a teenager his family left Puerto Rico to the promise of a better future in Utica, NY. By chance, Jose began to attend the same church as Ms. Maria Rodriguez, who he was united in marriage on May 18th, 1963. Jose and Maria found their way to Buffalo, NY where they fostered children. Fleeing the cold weather, they found their way back to Caguas, Puerto Rico making that their home for over 20 years. It was there that alongside his wife and mother-in-law Lydia, they had one of the most respected foster homes in all the island. They housed and cared for many children. It was there that they became the official parents to Juan and Miguel. Returning to Utica in 1993, Jose and his wife were met with the honoring task of taking their infant nephew Jason Jose Rodriguez and raising him as their own. It was then that they purchased a home in Orlando, Florida where they would live until 2019. A certified lover boy, Jose took pride in his appearance. He idolized the looks of Elvis Presley, and the parted combover was his go-to. If you wanted to be on time to an event, be sure to tell him in advance because he was prim and proper and he needed to make an entrance everywhere he went. Jose was the family jokester. Everyone relied on him for a good laugh. Jose was an excellent provider; he went to work every day with a smile on his face. No matter the task, you can rely on him to get the job done. A devoted husband, Jose was loving and supportive to his wife and helped care for his mother-in-law until her death in 2011. A devoted brother, he made it his routine to visit his sister Virgen and mother every day when he was able. He was loving to all his siblings and cared for them deeply. A devoted father, Jose was the role model to many of his nieces, nephews and foster children. He was also the father figure his youngest sister-in-law Carmen who she deeply loved and appreciated. A proud Puerto Rican, Jose enjoyed the beautiful sights of his island, the food, the culture, and its people. In January 2014, he suffered a stroke which left him unable to do the task he loved the most. Dementia made simple tasks difficult, and with time he required the full-time care and support of his family. Returning to Utica in 2019, He took pride in being the “Papa” to Maicol, and Solyani; which whom he lived with for the last 2 1/2 years. An honoring task, he was cared for by his wife Maria, Juanito and his “cachetona” Lydianne his big baby, and her fiancé Peter who he enjoyed getting his haircuts from until he took his last breath. Jose is survived by his wife of 58 years, Maria. His mother Gloria of Orlando, Fl. His siblings Ramon (PR), Jesus (FL), Gladys (VA), Maria Virgen (FL), and Blanca (NY). He leaves behind to mourn his beloved boys Juan, Miguel, and Jason. Many in-laws, nieces, nephews, and timeless friends. He was predeceased by his father Jose, Sr., his sisters: Hilda, Ana, Maria Milagros, Carmen Maria, his brother Luis Alberto and his mother-in-law, Lydia Gonzalez. We would like to extend our gratitude and thanks to the staff of Upstate Family Health, especially Jaime Blum, FNP-C who provided support and comfort to his family during his final hours and Tony the Pharmacist at Parkway Drugs Albany St. A very special thank you to Sharon Velazquez for providing care when needed. Services will be announced in the next coming days. We invite all our family and friends to take a moment to hug and embrace one another, we never know when it is our time. Relatives and friends are invited and may call Monday, January 24, 2022, from 3 to 4:30 p.m. at McGrath, Myslinski, Karboski & Nunn Funeral Directors, 470 French Rd., Utica. Funeral services will commence at 4:30 p.m.

Jose Martinez, 79, went home with the Lord on January 16th, 2022 with his loving family by his side in the comfort of his home. Jose was born March 22nd, 1942 in Adjuntas, Puerto Rico to Gloria Torres and Jose Martinez, Sr. As a teenager his... View Obituary & Service Information

The family of Jose Martinez Jr. created this Life Tributes page to make it easy to share your memories.

Send flowers to the Martinez family.