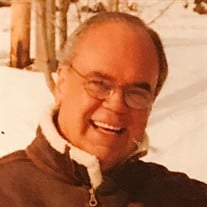 John C. Tracy 1941-2021 NEW HARTFORD- John C. Tracy, 80, passed away peacefully on May 13, 2021, at Sitrin Health Care Center. John was born on May 12, 1941, the son of the late Lester and Ann (Costello) Tracy. John was educated locally and attended both LeMoyne and Utica College. On April 19, 1963, John married Joan Flint, a blessed union of 54 years prior to her passing in 2017. John worked at GE in the Aerospace Department for 25 plus years. After John's employment with GE, he and his wife Joan resided in Melbourne Beach, FL and eventually moved to Manchester, Vt. After engaging in the retail sector in Vermont, they moved back to the Utica area and opened a men's clothing store in New Hartford. At the age of 66, John permanently retired his professional career as an employee of Site-Seeker, Inc. in New Hartford. John enjoyed gardening, spending time with his family and socializing with his close friends. On many Friday nights, John could be seen drinking a "JT Coffee" at the Uptown Grill. Sometimes, he would trade in his "JT Coffee" for a few rounds of Pitch with his children and grandchildren, usually declaring himself the "best player". He also enjoyed vacationing with his family in the Adirondacks, Hilton Head, SC and Juno Beach, Fl. John, as Patriarch of the Costello family, always cherished his close relationships he shared with many of his cousins in the Utica area and beyond. John is survived by his four cherished children, Mary Davis and her husband, Bradley, of New York Mills, NY, John Tracy, of Harrison, NJ, Ann Tracy and her fiancé, Jay Moody, of North Palm Beach, FL and Michael Tracy and his wife, Stacey, of Syracuse, NY; special daughter-in-law, Maureen Tracy, of Verona, NJ; his six beloved grandchildren, Catherine Joan Tracy of Arlington, VA, John and Andrew Tracy, of Verona, NJ, Thomas and Josh Tracy, of Saratoga Springs, NY and Lucas Tracy, of Syracuse, NY; John's brother, Michael Tracy pre-deceased him in 1992. John is also survived by his sisters-in-law Theresa Pettigrew and her husband, Richard, of Utica, NY and Lucille Klevanosky and her husband, Jay, of Naples, FL and their four children, Jill Maenza, John Klevanosky, Jennifer Craig and the late Jeanie Klevanosky. In addition to his Costello cousins, John is survived by several close longtime friends. Relatives and friends are invited to a Mass of Christian Burial on Saturday, May 22 at 10 a.m. at The Church of Our Lady of Lourdes, Utica. The family will receive guests following Mass. Interment will be in St. Mary’s Cemetery, Clinton. Remembrances in John’s name may be made to The American Heart Association, www.heart.org. Arrangements are under the direction of McGrath, Myslinski, Karboski & Nunn Funeral Directors, 470 French Road, Utica.

The family of John C. Tracy created this Life Tributes page to make it easy to share your memories.

Send flowers to the Tracy family.