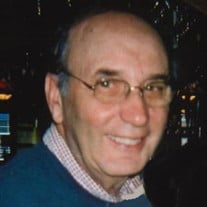 John (Butch) Louis Polera, 85, passed away peacefully on March 2, 2022, after a short illness. John was born in Utica, on June 21, 1936, the son of John Baptiste and Theresa (Masercola) Polera. He was a graduate of T. R. Proctor High School and MVCC. John served his country for six years in the U. S. Army. On April 18, 1964, he was married to Mary Catherine Cody in St. Mary’s Church, Little Falls. John was employed as a Designer at Stetson-Harza Architectural Engineering for several years and also at McDonald Montrose Architects until his retirement. He was a former volunteer at Thea Bowman House and served on the board of the De Sales Center. At one time he was on the Parish Council of the Church of Our Lady of Lourdes and was also a proud and long-time member of the “Proctor Boys”. He will always be remembered for his unique sense of humor. John is survived by his loving wife, Mary; son, Martin Cody Polera; daughter, Jennifer (Paul) Blier; grandchildren, Dylan, Isabella and Elizabeth Blier; brother, Ralph (Patricia) Polera; sister, Caroline Alito; sister-in-law, Mildred Polera; brothers-in-law, John (Patricia) Cody, Robert (Sharon) Cody; and several nieces, nephews and special friends. He was predeceased by his parents; brother, Rocco Polera; brother-in-law, Richard Alito; nephew, Robert Polera; father-in-law and mother-in-law, John and Catherine Cody; brother-in-law, Joseph Cody; and sister and brother-in-law, Ellen Cody (Frank) Wrobel. Relatives and friends are invited to attend a Memorial Mass to be celebrated on Friday, March 11th at 11:00 AM at Mary, Mother of Our Savior Parish, Our Lady of Lourdes Campus. The family requests that guests please wear a mask. The family is forever grateful to Hospice & Palliative Care, Inc., (www.hospicecareinc.org/donate) and Abraham House (www.abrahamhouse.org) for the wonderful, loving care they provided to John and in gratitude ask remembrances in John’s name be made to them or Thea Bowman House (www.theabowmanhouse.org). Envelopes will also be available at the Mass. Arrangements are under the direction of McGrath, Myslinski, Karboski & Nunn Funeral Directors, 470 French Rd., Utica. “Say not in grief they are no more; but live in thankfulness they were.”

John (Butch) Louis Polera, 85, passed away peacefully on March 2, 2022, after a short illness. John was born in Utica, on June 21, 1936, the son of John Baptiste and Theresa (Masercola) Polera. He was a graduate of T. R. Proctor High School... View Obituary & Service Information

The family of John Louis Polera created this Life Tributes page to make it easy to share your memories.

Send flowers to the Polera family.