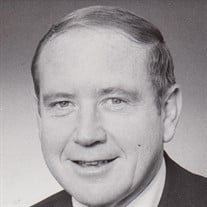 NEW HARTFORD – John J. Meehan, 91, passed away peacefully on Thursday, June 3, 2021, at the Lutheran Rehabilitation Center. John was born on September 23, 1929, in Utica, the son of Irish Immigrants, John and Sarah (Flynn) Meehan of Clogheen, Tipperary and Cloondahamper, Galway respectively. He was extremely proud of his Irish roots. He was a graduate of St. Francis DeSales High School and served in the U.S. Army from 1951-1953. Utilizing the GI Bill, John earned a Bachelor’s degree in Business from Utica College. On November 9, 1957, John married Elizabeth (Betty) Eisengrein in Blessed Sacrament Church. They enjoyed a blessed union of over 63 years. John owned a successful State Farm Insurance Agency, and obtained the Chartered Property and Casualty Underwriter designation in 1975. He was also a long-time member of the Yahnundasis Golf Club. A lifelong resident of Utica, John was a dedicated community servant and participated on the board of Catholic Charities, served the United Way in many capacities including Division Chairman, was the Broadway Theater League President, and served as the Grand Knight of the Knights of Columbus Utica Council 189. He was a person of strong faith and was a long-time member of St. John the Evangelist Church where he served on various committees through the years. Most recently, he was a member of St. Thomas Church. Additionally, John was an active participant in the National Alumni Council for his Alma Mater, Utica College, and was a decorated alumnus (2013 Pioneer Legacy Award, 2008 Outstanding Alumnus Award, and 1988 College Service Award) while also serving as the former Chairman of the Utica College Foundation Board. John is survived by his loving wife, Betty; children and their spouses, Daniel J. and Pamela Meehan, New Hartford, Kathleen M. and Mark Angelucci, New Hartford, and Susan E. and Alex Smith, DeWitt; grandchildren Meghan Meehan (Andrew Winderl), John “Jack” Meehan Angelucci, and Elizabeth “Lizzy” and Anna Smith; sister and brother-in-law, Agnes and John Grygiel and several nieces, nephews and cousins. John was especially close with his niece, Mary Belden. He was predeceased by his sister and brother-in-law, Marion and Ray Belden. Relatives and friends are invited and may call on Monday from 4 to 6 p.m. at McGrath, Myslinski, Karboski & Nunn Funeral Directors, 470 French Rd., Utica. Services by the William E. Burke Council #189 Knights of Columbus will be at 5:30 p.m. Funeral services will be Tuesday at 10 a.m. at the Church of Our Lady of Lourdes where a Mass of Christian Burial will be celebrated. Interment will be in Mt. Olivet Cemetery, Whitesboro. In lieu of flowers, remembrances in John’s name may be made to the John ’61 and Betty Eisengrein Meehan Scholarship Fund at Utica College or Hope House. John’s family would like to thank the nurses and staff at the Lutheran Rehabilitation Center, especially those on the Gordon Unit, for the care and compassion shown during his stay. For those wishing to attend the Mass virtually: https://www.youtube.com/c/JoeSalernoOLOL For online expressions of sympathy, please go to www.mmknfd.com

The family of John J. Meehan created this Life Tributes page to make it easy to share your memories.

Send flowers to the Meehan family.